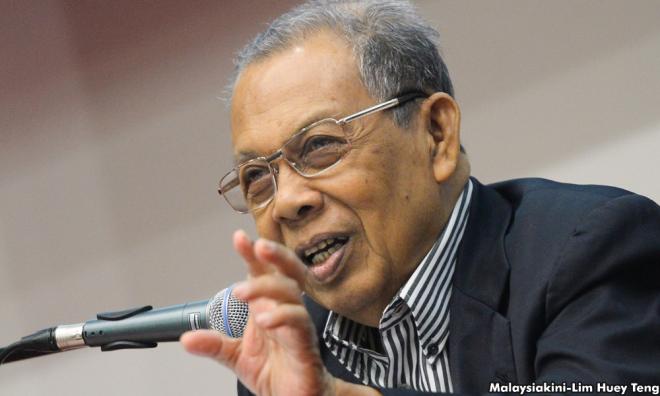 Yoursay: Inexcusable for ex-CJ to make an error of facts

YOURSAY | ‘How did he become a CJ in the first place when establishment of facts is paramount?’

The Red Baron: Quite honestly, the fact that Abdul Hamid Mohamad was the chief justice (CJ) of Malaysia is shocking, appalling, dreadful and totally inexcusable.

Decades of Malay supremacy (ketuanan) and racial and religious bigotry has created a situation where a man who in his infinite wisdom ruled that "Muslims don't lie" and who under normal circumstances could not even have qualified to be a magistrate became the top judicial officer of Malaysia.

Do we need any more reasons to what ails our beloved nation?

Anonymous 1689721435778173: It is laudable that this man has admitted his mistake (for claiming that Dr Mahathir Mohamad had gone to the Istana Negara uninvited on May 9 in an attempt to be sworn in as prime minister) and apologised for it.

However, there are still many things he wrote about previously for which he should apologise. Indeed, he is a great disappointment for a person who was a former chief justice of the country.

Hplooi: Before commenters "laud" this ex-chief justice, they should remember the context of his apology.

1. The ex-CJ apologised simply because it involved Mahathir. Do you think he will apologise if this is defamation regarding (say) Lim Kit Siang or the DAP or even any non-Malay?

2. The ex-CJ is a bigoted Malay elevated to the highest office of CJ simply because of his bigoted views.

Recently he has "warned" the National Unity Convention that Malays will become "Red Indians" in their own land.

Back when he was on the bench as a judge, he famously wrote a judgment which says that a testimony by a Malay is admissible simply because he is a Muslim (ostensibly Muslim do not lie) but the testimony of an Indian was rejected (ostensibly a non-Muslim cannot be trusted).

This is the measure of Abdul Hamid, an Islamo-fascist and race bigot.

Anonymous_ba958b7b: Hamid, this is a good start - that you are able to apologise for not speaking the truth.

Let me remind you that there are many other things you have spoken about other communities that are not truthful. You have to apologise to them too.

Harry L Ishmael: I'd like to ask this honourable ex-chief judge of how many times on purpose as he made such mistakes.

This most certainly could not have been a mistake, it was not even an allegation he stated it as a fact, and therefore it was a deliberate lie coming from a former chief justice.

I'd like to ask him, I'll refrain from making any allegation, but was he paid to tell that brazen lie? And I'd also like to remind him that telling one lie to cover another is surely not the way to go.

JBKing: Shame to you, Hamid. As a former chief justice, you are supposed to be an expert in collecting facts and make a decision based on facts and law.

You are supposed to be also impartial and not to be influenced by other matters like whether you drank coffee or tea when you make a decision.

Now we know how naive and low you are. My advice to you is to stay happily retired and go hide under your "tempurung" (coconut shell).

Puzzled: Hamid is a self-anointed ‘jaguh Melayu’ (Malay champion), not ‘jaguh’ Malaysians, (and a skewed, weak one at that). See the difference?

His methods and his thoughts both failed his own people he purported to represent and his nation he supposedly pledged his loyalty to.

It is he who helps smear the reputation of the judiciary and the nation, and may we learn from all these shenanigans and extend our worldview beyond our coconut shells of race and religion as he does.

We, as a nation, made a mistake in having him as our CJ; and yes, we deserve better but for now accept this as a charade in our nation's history and move on.

Jasmine: Can anyone disgrace and dishonour oneself more than this man has?

Yes, there are a few politicians out there awaiting free food and lodging. But then as expected, politicians somehow have it in their genes to disgrace themselves in words and conduct and end up in the sewers.

This man, however, was the CJ of this country at one time. He headed the institution that people were expected to resort to for justice to prevail. How on earth did he get elevated thus; if not for being what he has proven to be while on the bench and more so now?

It is because this was and still is a man who could easily, fervently, knowingly and racially be beholden to the rats who made him the CJ.

And that puts us all to shame, for having permitted scums to rise well above the minimum moral values expected of any ordinary man in the street.

Shahzamani: Hamid, I wonder how many cases you made in the past were decided based on error of facts.

You were an ex-chief justice. You were supposedly trained to weigh your facts and decisions carefully with utmost duty of care. It is impossible to believe that you could have made such an error.

The swearing-in event happened eight months ago. Surely, you had plenty of time to gather your facts.

Indeed, the public should doubt Hamid’s competency as chief justice. Perhaps the Bar Council should review all his past cases to determine if they likewise contained error of facts.

This is absolutely a very shameful act from an ex-chief justice.