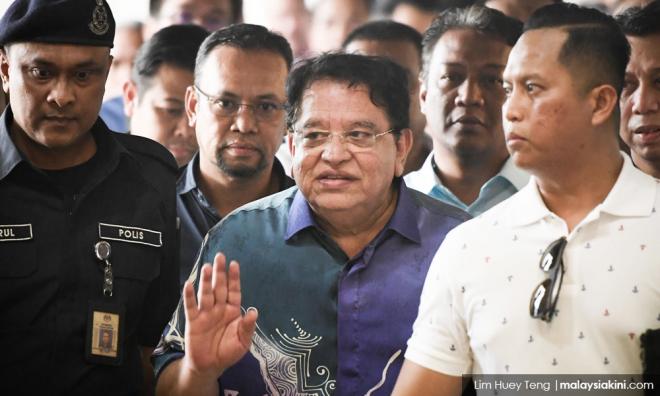 He reiterated his plea after the charge was read out again when the case came up for mention for the first time before High Court judge Mohamed Zaini Mazlan after its transfer from the Sessions Court.

The High Court, on Dec 14 last year, allowed the defence application to transfer the case from the Sessions Court to the High Court under Section 417 of the Criminal Procedure Code.

Justice Mohamed Zaini also allowed an application by lawyer Tan Hock Chuan, representing Tengku Adnan, 68, for the temporary release of his client’s impounded passport, to travel overseas for business and also informed the court that his client also had two children studying overseas.

In allowing the application, Justice Mohamed Zaini allowed the return of Tengku Adnan’s passport until the next date of mention, which is Feb 28, with bail of RM500,000 in one surety.

The prosecution, conducted by deputy public prosecutor Julia Ibrahim, did not object to the application and she also informed the court that the case would be heard jointly with another corruption case involving the 68-year -old Putrajaya MP.

Tengku Adnan, as a public servant then, namely, Federal Territories Minister, had allegedly accepted for himself something valuable with no reciprocity, namely, RM2 million from Chai Kin Kong via a Hong Leong Islamic Bank cheque belonging to syarikat Aset Kayamas Sdn Bhd which had been deposited into the CIMB Bank account of Tadmansori Holding Sdn Bhd in which he had an interest, when it was known that Syarikat Aset Kayamas had connections with his official duties.

He was charged with committing the offence at the CIMB Bank Berhad, Pusat Bandar Damansara Branch in Kuala Lumpur on June 14, 2016, under Section 165 of the Penal Code, which provides jail up to two years or fine or both, if found guilty.

It was allegedly for approval of an application by a company to raise development related ratio in Jalan Semarak, Kuala Lumpur in 2013.

The case will come up for mention before High Court judge Mohd Nazlan Mohd Ghazali.

The deed was allegedly made as a reward for himself because he had performed something real, namely, approving the application of Nucleus Properties Sdn Bhd (now known as Paragon City Development Sdn Bhd) to raise the ration of plot related with the development of Lot 228, Jalan Semarak, here.

He could be jailed not more than 20 years and fined not less than five times the amount or value of the bribe which is the subject of the offence if the bribe could be valued or in monetary terms, or RM10,000 whichever is the higher, if found guilty.

Tengku Adnan was also charged with an alternative charge, namely, in the same place and date, as the FT minister, had received for himself a valuable item without reciprocity, namely, RM1 million from Tan via a Public Bank cheque belonging to Pekan Nenas Industries Sdn Bhd which had been deposited into his CIMB account, when it was known that Tan, as a director in Syarikat Nucleus Properties Sdn Bhd, (now known as Paragon City Development Sdn Bhd) had connection with his official duties.

The charge under Section 165 of the Penal Code which provided a jail term of up to two years or with fine or both, if found guilty.