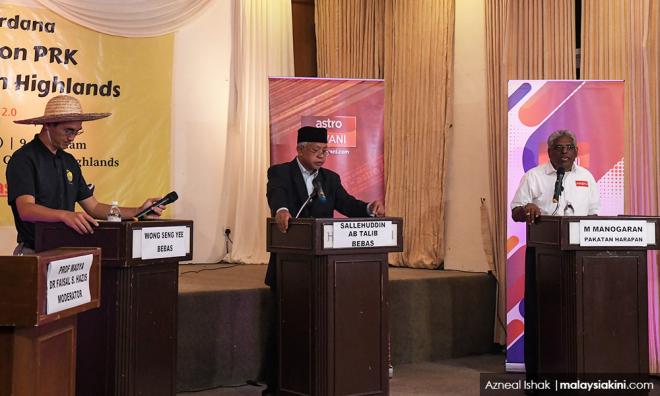 In last mile of Cameron race, candidates go all out to please voters

Manogaran was responding to a question by moderator Faizal Hazis on land issues at a debate between three of the four by-election candidates, which was televised live on Astro Awani and TV1.

Faizal had asked the candidate about the possibility of Putrajaya filing suit against the BN-led Pahang government over Orang Asli land rights, as it did against PAS-led Kelantan.

"Maybe I will saman (sue) the Pahang government, whether or not I win or lose.

"Native lands should be maintained the way they are, the Orang Asli do not need to relocate elsewhere," he told the audience of 50.

The debate, titled 'What Changes Does Cameron Highlands Need?' was organised by electoral reform group Bersih, and saw Manogaran go up against the two independent candidates, Wong Seng Yee and Sallehuddin Ab Talib.

BN candidate Ramli Mohd Nor had previously indicated his refusal to participate in the debate.

To the same question, Wong said he would take a "softer" approach to land matters.

"I will try to reach an understanding between the parties involved.

"I don't have the resources to initiate legal suits, so my focus will be towards creating a win-win situation for the federal government, state government, and the Orang Asli," the farmer said.

Sallehuddin, meanwhile, merely pointed out that for Orang Asli, land matters are a sentimental issue.

To a question on using development to fish for votes – as critics have accused Harapan of doing – Manogaran said the pledges were made based on the requests made and the grievances expressed by locals.

"It's just that my knock (on the government's door) will be louder if I'm elected the MP," he told the audience.

Wong stressed that his focus will be on an agricultural plan for the highlands, to move it towards what he called "Agriculture 4.0."

"Even if I'm not chosen, I will fight towards that goal," he said, highlighting his more than 15 years of experience serving in agriculture-related NGOs.

Sallehuddin, meanwhile, emphasised that his fight will be for the second generation Felda settlers, specifically the debt issues they face.

Asked about what they can offer to the Orang Asli community – who make up nearly a quarter of the Cameron Highlands electorate – Wong said the natives should be appreciated and respected, and thus, his focus will be on gazetting their land and enhancing their economic standing.

"I will work with the relevant parties to upgrade the community's cultivation so that they don't have to burden the government, and create an online platform where they can sell their products."

Sallehuddin, meanwhile, stated that he will work towards addressing the high rate of school dropouts among Orang Asli children.

"When they skip school halfway, they feel left behind, and get inferiority complex. I will work towards changing their mindset so that they can compete in the mainstream.

"Only when they are suffering in poverty are they easily exploited by the powers that be."

As for Manogaran, he said he will give the Orang Asli "more" than just basic infrastructure and land, which is rightfully due to them as citizens of the country.

"I will hold their hand and include them in developing the country. Dignity is what they need.

"I will also look at the weaknesses of the Orang Asli Development Department (Jakoa), and the Aboriginal Peoples Act 1954."

Wrapping up, Manogaran questioned Ramli's absence from the debate.

"What is his stance on the questions posed? If he has no guts, then he shouldn't contest. If he wins, what will he say in Parliament (on these issues)?"

Wong, meanwhile, reiterated his focus on sustainable agriculture and environment.

"Right now, we are in an uncomfortable position with a BN state government and a Harapan federal government. If I am chosen, I will be the bridge (between both to address local issues)."

Sallehuddin pledged that if chosen, he will carry the rakyat's voice in Parliament.