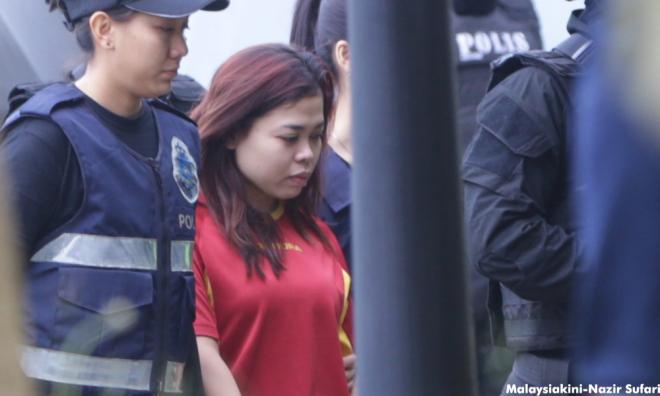 The prosecution in the murder trial of Kim Jong-nam, the estranged half-brother of North Korean leader Kim Jong-un, was today ordered by the Court of Appeal to supply cautioned statements made by witnesses to the defence.

This followed a decision by a three-member bench, chaired by Justice Umi Kalthum Abdul Majid, in allowing an appeal by lawyers representing Siti Aisyah, 26, to compel the prosecution to provide them copies of the witness statements.

When asked by Umi Kalthum when the prosecution could serve the statements, deputy public prosecutor Dusuki Ahmad replied that they would do so in two weeks, but applied for a stay of the ruling, pending the prosecution’s appeal against today’s order to the Federal Court.

“The application to stay the order is allowed pending leave and/or appeal to the Federal Court,” said Umi Kalthum, who presided over the appeal with Justices Harmindar Singh Dhaliwal and Rhodzariah Bujang.

Dusuki also requested the proceedings at the High Court – set for Jan 28 but stayed until disposal of the appeal at the Federal Court – to which Umi Kalthum ordered the prosecution to make the application before the High Court judge.

Earlier, the judge allowed the defence's appeal, and set aside the order of the Shah Alam High Court in rejecting the defence request to compel the prosecution to produce them with copies of statements under Section 112 of the Criminal Procedure Code (CPC), made by seven prosecution witnesses to the police.

Siti Aisyah’s counsel, Gooi Soon Seng, submitted that the witness statements should not be excluded from the defence, as it was not qualified as privileged but public documents.

“The prosecution has to provide the witness statements to the defence in order for our client to get a fair trial,” he said.

Dusuki countered that the statements were privileged documents and the prosecution also feared there would be tampering of witnesses and evidence if provided to the defence.

“For example, information which could create an impact on national security and interests of justice. This information could be used by the defence to discredit the administration of justice and police,” he said, adding that it had always been the prosecution’s stand not to provide witness statements to the defence as it was a matter of public policy.

On Aug 16, 2018, the High Court ordered Siti Aisyah and Vietnamese Doan Thi Huong to enter their defence on a charge of murdering Kim.

However, their defence trial has yet to commence pending the defence application to obtain witness statements from the prosecution.

They were charged with four others still at large with the murder of Kim Chol, 45, at the KLIA2 departure hall at 9am on Feb 13, 2017, and if convicted they face the mandatory death sentence under Section 302 of the Penal Code.