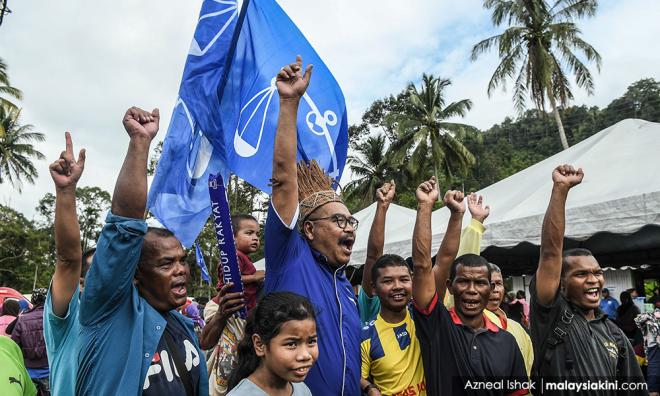 The prediction was based on a face-to-face survey it conducted with 402 respondents of all races, genders, and age groups using the random stratified sampling method.

It said among the factors influencing voters to pick BN were Malay-Muslim sensitivities, local issues, the impact of former prime minister Najib Abdul Razak's campaigning, and backing from PAS supporters.

Another factor going against Pakatan Harapan would be the possibility of a low voter turnout among non-Malays.

The centre said many of the respondents interviewed said their children who vote in the constituency would not be likely to return from out of town for the by-election tomorrow.

The fact that polling day is taking place just a week before Chinese New Year is deemed to be a discouraging factor for outstation voters.

Meanwhile, Ilham Centre said Orang Asli voters were no longer a safe deposit for BN, with a small swing expected to go towards Pakatan Harapan.

However, the think tank said Harapan needs to get at least 30 percent of the Orang Asli votes if it is to stand a chance of winning tomorrow.

"Based on this, we expect BN can win this by-election with the support of a majority of Malays and Orang Asli, and low turnout among Chinese and Indian voters," the centre said in a statement today.

Only a miracle can stop Najib's win in Cameron, says Kit Siang
25 Jan 2019
Najib denies Indian votes will give Harapan the edge in Cameron
24 Jan 2019
Both BN and PAS agreed on Cameron candidate, Khalil says
23 Jan 2019
In last mile of Cameron race, candidates go all out to please voters
23 Jan 2019