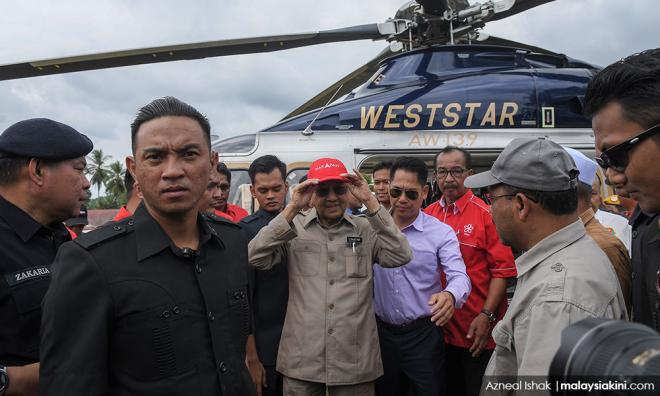 'I adore KSM award,' says Mahathir at his witty best

CAMERON POLLS | Dr Mahathir Mohamad demonstrated today that he was as witty as ever as he campaigned for Pakatan Harapan in the Cameron Highlands parliamentary by-election on the eve of polling.

“KSM is the award that I adore,” the 93-year-old prime minister said and explained that the acronym stood for ‘Kerja Sampai Mati’ (work till death), drawing laughter and applause from the thousands of voters gathered at Sungai Koyan near Kuala Lipis.

Mahathir, who has returned to serve as the prime minister for the second time following the Harapan election victory last year after having been the fourth prime minister from 1981 to 2003, told the people that as long as he lived he would continue to rectify the situation in the country.

The oldest elected leader of the world said he served the country not for money but because he loved the nation.

“This is our country, we were born here, raised here, got married here, have had children here and our children have benefitted greatly from this country.

"Don’t we love this country of ours?” he asked, drawing more applause and shouts of ‘Long Live Mahathir’ from the attentive crowd.

Mahathir said that at 93, the usual awards no longer appealed to him.

“I will keep talking so long as I can do so. I am already 93. There’s not much time left. I want to work till death. The other awards no longer appeal to me. The best is KSM, the award that I adore,” he said.

After his speech, Mahathir and other Muslim leaders attended Friday prayers at the Sultan Haji Ahmad Shah Mosque in Kuala Lipis.

After the prayers, the prime minister chatted with some of the worshippers and left for Kuala Lumpur by helicopter.