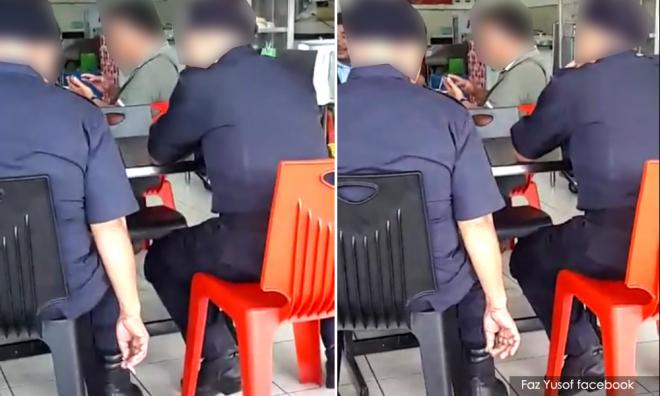 The police will take appropriate action against the policeman who was caught on a viral video yesterday breaching the smoking ban in food premises.

Inspector-general of police Mohamad Fuzi Harun said instruction had been given to the relevant departments to identify the policeman involved.

“He is a uniformed personnel and he should know that the government has put the ban into force, which should be adhered to by all quarters, including officers and members of the Royal Malaysia Police.

“It is very unethical if they breach the ban by smoking in open-air eateries,” he told a press conference at the Johor police contingent headquarters after attending a meeting with state directors of the Crime Prevention and Community Security Department in Johor Bahru today.

He said this in response to the eight-second viral footage showing the policeman holding a cigarette in his hand while being in a restaurant, which is one of the no-smoking areas.

It is believed that the incident occurred in the peninsula as there were no-smoking notices spotted in the restaurant. The ban has taken effect in all food premises in the peninsula from Jan 1, while Sabah and Sarawak will only put it into force on Feb 1 and March 1, respectively.

Meanwhile, Fuzi stressed that the police were working hard to change negative public perception and dissatisfaction over the reduction of crime rates announced by the police.

“We are working so hard to reduce crime rates in the country, but the people seemed unconvinced (with the reduction). So, we will improve this situation,” he said.

The IGP said efforts had been taken for this purpose, including empowering the police’s cyber taskforce in tackling negative perception in social media, and also by enhancing engagement with the public and private sectors to correct the perception.

“There was no special allocation from the government for these efforts. So, we have to seek cooperation from the public and private sectors.

“That was what we did in Kuala Lumpur. We have done six series of engagement; even with no budget, we managed to make optimal use of other elements to make it a success,” he said.

He said their engagement with the management of Berjaya Times Square mall, for example, had succeeded in reducing crime rates in the area.

“At one time, we did it in KLCC, and we managed to reduce pickpocket cases which were worrying in 2016. We are not bragging. This is based on reports by the relevant parties,” he said.