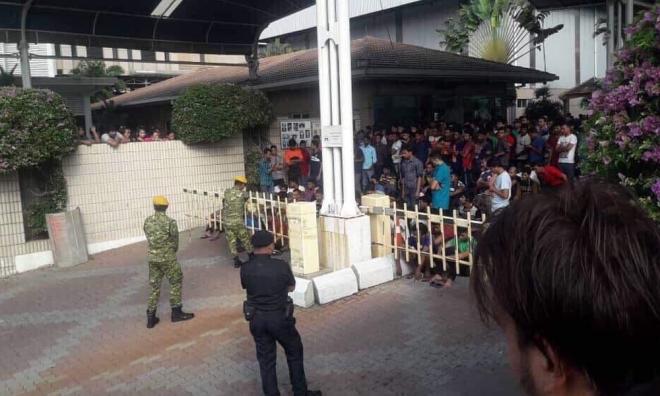 Ministry to take glove company to court over unpaid wages

A glove manufacturer will soon be hauled to court over unpaid wages and other labour-related offences.

This follows an investigation by the Human Resource Ministry's Labour Department after a three-day strike staged by nearly 2,000 of the company's Nepali workers.

"Action will be carried out soon to ensure the same offences will not be repeated and it will serve as a reminder to other employers," said the department in a statement today.

It did not elaborate on the provision of law that will be used against the company.

The migrant workers of the WRP Asia Pacific Sdn Bhd, a glove manufacturing company in Sepang, had gone on a strike earlier this week claiming that they were not paid three months worth of wages.

The Labour Department, which was informed by the police of the strike on Jan 29, said it paid a visit to the company’s premises, together with representatives from Industrial Relations Department, Bangladesh High Commission and Nepal Embassy, to identify the reason behind the strike.

“Investigations found that the main reason of the strike was that the employer had failed to pay the workers since November 2018," said the department.

It also identified other offences, namely delay in overtime payment and illegitimate reduction of wages.

Following discussions with the management, the department noted that WRP Asia Pacific agreed to pay the outstanding salaries and overtime payment owed to the staff by Feb 28.

Last December, The Guardian revealed that the British National Health Service was using medical gloves made in Malaysian factories, where migrant workers mainly from Nepal and Bangladesh, were allegedly subjected to exploitative working conditions.

WRP Asia Pacific and another major glove manufacturer were named in the report.

Three of the 19 workers interviewed by The Guardian were from WRP Asia Pacific, and they related stories of excessive overtime, confiscation of passports and illegal withholding of their salaries.