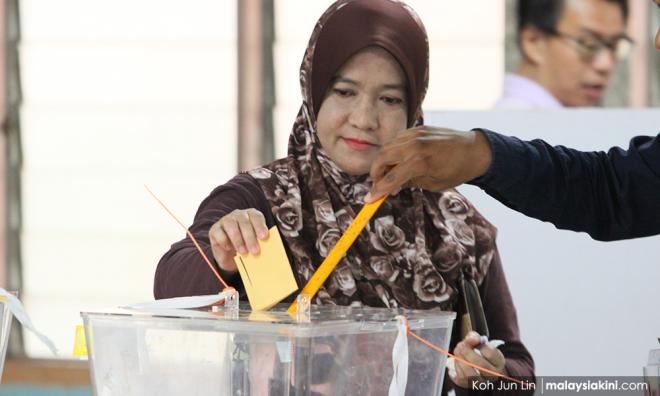 Yoursay: Semenyih polls another chance for people’s voice to be heard

YOURSAY | Harapan needs to listen closely or this will be another hard lesson for them.

After Cameron tumble, can Harapan hold on to Semenyih?

Clever Voter: The overcautious approach of Pakatan Harapan in the Cameron Highlands by-election is obvious, plus the lack of a coherent front adds to the confusion and cynicism.

It's not even mid-term, and Harapan has time on their side. But if the priority is to ensure that populist policies are being pursued at the same level as Umno, there will be no significant differences and many people, especially in the rural and semi-urban areas, will prefer the rent-seeking culture of more handouts and subsidies.

This is inevitable, and it looks as if Harapan needs to return to the drawing board to draw up policies reflecting the country and not a few selected areas.

Just Sharing: Even though Selangor is Harapan’s stronghold, I really wish that the people will send a strong message to Harapan not to take the people for granted.

Anonymous: Harapan may lose the Semenyih by-election by a razor-thin margin, but it will be a huge win for the opposition because Harapan won this state seat with an almost 9,000 majority in GE14. (or about 2,000 majority if we add Umno and PAS votes together).

PSM’s decision to enter the fray is simply to split Harapan’s votes. I believe that if Harapan loses Semenyih in addition to Cameron Highlands, only then will the coalition seriously start listening to multiracial votes - or the eventual heightened infighting for racial votes within Harapan.

Malaysians must be wiser in charting the unknown political scenario.

Anonymous_1538808416: The by-election can go either way, but I think it will favour the opposition slightly this time around because firstly, justice is not served (we will be expecting chief “lanun” riding pillion on a motorbike waving to the crowd again) and secondly, cost of living is not going down.

Harapan, under Mahathir’s Bersatu, is just as racist if not more than Umno. Party infighting is creeping back in, the United Education Certificate (UEC) promise overturned and our economy taking several steps back.

Surely Malaysia Baru can do better than this.

Pro-Justice: Don't expect anything better from Harapan so long as its component parties do not rein in Prime Minister Dr Mahathir Mohamad and his 22-year misrule.

Instead of tackling more important issues at home, our great statesman Mahathir is back to his “Malay Dilemma” days as well as busy expecting brownie points for his foreign policy diatribes.

There is no consensus in Harapan, only what Mahathir wants. DAP, PKR and Amanah have all been neutered. It is what Mahathir and Bersatu want, and this has become the mantra of Harapan.

Fairplayer: @Pro-justice, exactly! Harapan has proven to be worse than BN, and DAP’s Lim Guan Eng is eating out of racist hypocrite Mahathir's hand.

Guan Eng had better be prepared not to become the fall guy.

VP Biden: If they have done their homework on how to counter race and religious issues and steps taken to improve cost of living, Harapan will hold Semenyih.

True information must be disseminated to counter the opposition.

Jaguh: Resolve and conclude the issue of firefighter Muhammad Adib Mohd Kassim’s death quick and remove this nagging issue which has racial implications.

Anonymous: What silly suggestions from former minister Rais Yatim. Whilst I agree that campaign promises must be kept, the Cameron Highlands loss was due to BN and PAS playing the race and religion card.

If it was about promises alone, why was there a significant increase in Orang Asli vote for Harapan in addition to holding on to the Chinese and Indian votes?

BN and PAS only spoke against DAP being anti-Islam and anti-Malay. This kind of campaigning is dangerous.

Former minister Rais Yatim should be using his experience to rebut such racial and religious bigotry to win votes. His idea of lowering petrol price, etc, to win an election is ridiculous and exactly what we are trying to get rid of in New Malaysia.

Mosquitobrain: Rais is still carrying Umno's corrupted DNA with him. His 'tongkat' mentality is no different from vote buying.

Is this not akin to 'robbing Peter to pay Paul?’ Why are the perks only going to a small populace instead of the whole nation?

Anonymous_1372516784: It’s true what was said by Rais. Harapan should walk the talk on all promises they made during GE14. Do it now, it’s still not too late.

Constitutional Supremacy: I have just read the analysis by Bangi MP Ong Kian Ming. Harapan had retained their earlier support but the percentage of Chinese and Indian voters had dropped. Harapan had increased support amongst Orang Asli.

The win was due to PAS cooperating with Umno and their members voting for Umno.

Salvage Malaysia: My observation is that this time around, Mahathir seems to be even more stubborn than before; maybe because he knows it’s his last term anyway. Honest feedback is probably swept aside and his style of 'my way or the highway' is very prevalent.

That’s why our foreign diplomacy now looks really bad. And it does look like many Harapan leaders are emulating his style. That’s why they begin to speak loudly and arrogantly.

So if we want to blame the lacklustre performances of some ministers, the fault actually has to go to the PM too. Lead with humility and focus on the coalition’s promises.

The economy is really dead at this moment! And stop coming out with trivial policies like plastic straws and smoking bans, etc, that is counter-productive to businesses.

Hearty Malaysian: Harapan needs to show commitment to carry out its GE14 manifesto even if it’s step-by-step progress.

Start with cutting the toll by 15 percent for example, recognise UEC qualification, abandon the money-wasting third national car project, improve the government’s finances by plugging all the leaks instead of collecting more taxes which burden the people.

Mahathir needs to shift Khazanah and PNB out of the PM’s Department and to Finance Ministry to show he is sincere.