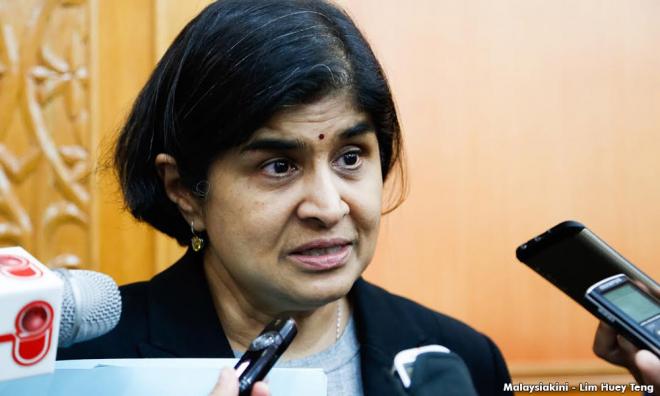 She was referring to Najib's efforts in the past few months in meeting grassroots leaders, local communities and the people, especially during the Cameron Highlands by-election.

"It's a masterstroke, the way he (Najib) is carrying on... he is not keeping quiet... he is not crawling away into a corner.

"This is the kind of work you need to do on the ground to move forward as a coalition. They (Pakatan Harapan) could take a few lessons from there, that's what I would say," she was reported as saying by the Malay Mail today.

Najib had actively campaigned for BN during the Cameron Highlands by-election, travelling to various areas, including Orang Asli villages where he had meals together with them.

Apart from the by-election, Najib has held several meet-the-people sessions, including one in Shah Alam recently titled 'Malu Apa Bossku' where he tested a black-and-red Yamaha Y15ZR 150cc motorcycle.

A picture of him on the motorcycle and its registration plate of 8805KU went viral on social media, sparking off a 'Malu Apa Bossku' meme and hashtag.

Najib himself began using that hashtag and merchandise featuring that picture of him and that phrase went on sale.

The former prime minister also now posts his statements often on social media, even gaining the name the "King of Trolls".

Ambiga said while BN and Umno are still in disarray, Harapan needs to change the narrative to lead the nation.

“If Harapan behaves as a government for all, they can actually change the narrative... what we are reading now is people are freely using extremist language and there is no rebuttal from Harapan.

“There is no one coming out to say that’s not the way we want the nation to go. Harapan used to be critical in rebutting when they were the opposition,” she said.

Ambiga also said it is important for Harapan to start a needs-based policy immediately to address the concerns of the rakyat.

"If they do that they will be stronger. I think they are taking steps but for some reason, it’s not coming together,” she said.

Despite advising Harapan to learn from Najib, Ambiga said it is "very worrying" that the former prime minister, who is facing 42 charges of graft and abuse of power, is gaining traction again.

Given the number of criminal charges he faces, Ambiga said Najib act of gaining traction in trying to remain politically relevant would probably be unheard of in other countries.

“Absolutely, he has the right to do whatever he’s doing now but the very fact he’s gaining traction is very worrying.

“Because I’m not sure if he was in any other country, he could have done this when he has been charged with so many serious offences," she said.