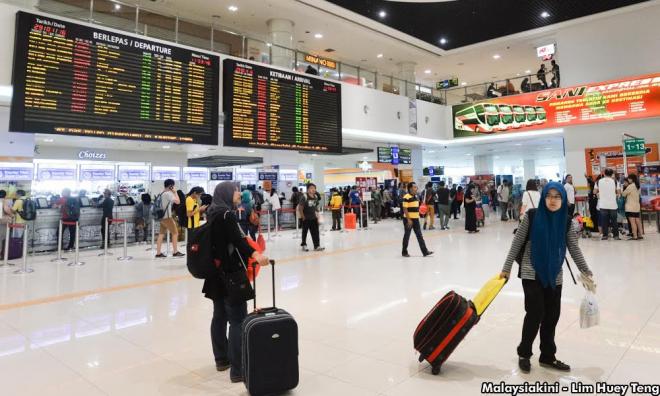 Prime Minister Dr Mahathir Mohamad wants other bus terminals in the country to emulate the centralised ticketing system (CTS) adopted by the Southern Integrated Terminal (TBS) since it began operation in 2011.

Mahathir, who also commended the effectiveness of the system, said it could raise the quality of the public transport industry in the country especially the bus service.

“I find travellers here are comfortable and the service here is good. But I think this bus station should also be found in other places.

“This model station should be built all over Malaysia. Maybe other stations are smaller but the system here is very good,” he said today after making an unscheduled visit to TBS in conjunction with the upcoming Chinese New Year festivities.

The premier also spent almost an hour to check out the operation of the integrated terminal and mingled with the people at the station before visiting the food court on the fourth floor of the terminal.

The CTS, which was adopted by TBS eight years ago, is the latest system in which the sales of tickets by individual express bus operators are integrated into an innovative and organised system.

Consumers could purchase bus tickets at the counter as well as at self-service ticket kiosks at 12 locations in the terminal. CTS also prevent travellers from being deceived by ticket touts as each ticket purchase required personal details and the destination involved.

While expressing his great satisfaction with the service at TBS, Mahathir wanted consumers to benefit from the existing facilities apart from taking care of its cleanliness while at the terminal.

“If we want to take into consideration the huge number of travellers here, we should ensure the place is clean including the toilets,” he said.

Meanwhile, Kumpulan Maju Holdings Sdn Bhd chairman Abu Sahid Mohamed said the idea of building the terminal was brought up by Mahathir in 2000.

“He wanted me to conduct a study as there were complaints by the people on the congestion and presence of touts at the station in Pudu. I took about three years to research on the matter,” he said.

According to Abu Sahid, the terminal began operation on Jan 1, 2011 and was managed by Maju Terminal Management and Services Sdn Bhd (Maju TMAS), a subsidiary of Maju Holdings Sdn Bhd.

It was built on a 1.026 million sq ft site and the terminal building has six floors including ticket counters, restaurants, surau and toilets.

TBS is also linked with a network of city public transport via pedestrian bridges for travellers to change to KTM Komuter service, Express Rail Link (ERL) to get to KLIA and Rapid KL for rail and bus service integration.

“In TBS, there are about 680 CCTV cameras now compared with 542 earlier. We have also provided 2,500 parking bays for our customers,” he said, adding that the terminal received up to 40,000 visitors on a normal day and during festive seasons the number could go up to 70,000.