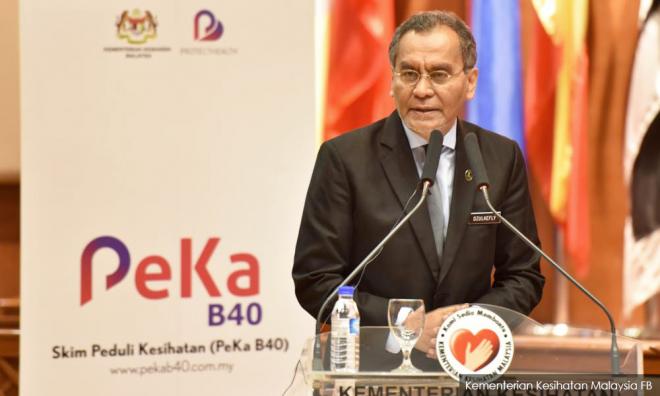 The PeKa B40 healthcare protection scheme is still in the pioneer project phase and has not been fully launched, says the Health Ministry.

Minister Dzulkefly Ahmad said the launch, which was held on Jan 28, was a media launch session aimed at boosting public awareness on the scheme.

"Currently, the Health Ministry wants to study the acceptance of the people and other stakeholders towards this scheme.

"The involvement and support of every stakeholder is very important in ensuring the success of the PeKa B40 scheme, namely, an initiative which focuses on the public-private ties via financing from a government fund," he said in a media statement here today.

PeKa B40, which is fully government-funded with a starting allocation of RM100 million, is expected to be able to benefit 800,000 recipients.

Bantuan Sara Hidup (BSH) receivers and their partners who are above 50 years old are eligible to participate in the scheme automatically, with no registration required.

Dzulkefly said that for the PeKa B40 scheme’s pioneer project phase, private stakeholders who would be involved in the process of granting health screening benefits to patients were the owners of private general medical clinics and private medical laboratory companies.

The PeKa B40 Scheme is managed by the Health Ministry through ProtectHealth Corporation Sdn Bhd (PHCorp), a 100 per cent owned company of the government established as a non-profit company under the ministry.

"PHCorp is not a managed care organisation (MCO) or third party administrator (TPA). It is set up to widen access to quality healthcare services by optimising the use of existing public and private healthcare ecosystems," he said.

He said from this month (February), the ministry would hold a series of meetings with the relevant stakeholders to discuss their involvement in the scheme.

He pointed out that the PeKa B40 scheme would be implemented in stages to ensure the success of each phase of implementation and build a solid PeKa B40 scheme foundation before it is expanded later.

The implementation of the PeKa B40 scheme was the federal government's commitment to widen access to the necessary health services, reducing the burden on cost of living and improving the well-being of the people, he said.