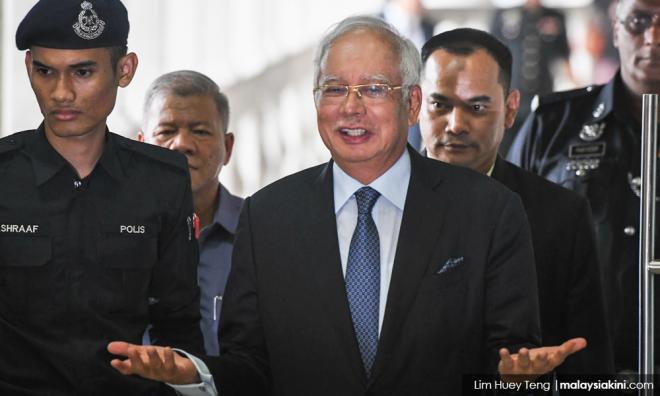 Yoursay: Perhaps not a serial killer, but Najib is a serial kleptocrat

YOURSAY | ‘The former PM is a shameless and a most despicable character.’

I must be a serial killer, jests Najib

KingKriolle: Former PM Najib Abdul Razak, the main reason for the downfall of BN is the 1MDB scandal. The scandal was no lie. It is you and your co-conspirators who told lies after lies about 1MDB.

Najib, just after you were ousted, hundreds of Birkin handbags, thousands of pieces of jewellery and designer watches, not to mention, millions of cold hard cash in various currencies, were confiscated from your residence and residences linked to you.

This is very unusual and the coming court cases will prove your guilt on a number of criminal charges. These may be lesser than murder charges, but it is sufficient to put you behind bars nevertheless.

Kamikasi: Yes, Najib knows that all the charges will take some time before they eventually come crashing down on him.

Taking advantage of the situation, he is trying to play innocent among the less informed group, especially the supremacist groups, and to inflict as much damage on the Pakatan Harapan government as possible.

He is a shameless and a most despicable character.

Clever Voter: Najib may not be a serial killer but he is certainly a serial liar.

He should be thankful that he is allowed to speak and campaign freely for his freedom. He knows his back is against a wall. He knows the background of the cases he cited.

But when he was prime minister, he did nothing to create confidence and trust in him. He launched a series of lies, one after another, to cover up his wrongdoings but his inconsistencies gave them away.

Charged with 40-plus cases, he cannot say he has nothing to do with them. Still, he denied and maintained his innocence. And he tried throwing his own people under the bus.

Najib should try campaigning in a better-informed constituency. He will find either empty chairs or risk someone throwing a shoe at him.

The criminal breach of trust (CBT) charges involving SRC International will start soon. Indeed, Najib should be locked up in view of the severity of the cases.

Najib can continue to mock at his political enemies. As a serial liar, he is a threat to peace and harmony. He should be thankful he can still walk around freely in the island of Langkawi.

Abd Karim: Najib, the surprising thing is you are still treated like a VIP despite the damage done to the nation. It shows how bad our education level is.

Segments of society are not able to differentiate between right and wrong. All the emphasis on Islamic and moral studies in schools and colleges has come to nought.

The muftis, too, are incapable of showing the flock the right path. It is very disappointing. This is the hallmark of a Third World nation.

Kevin: Poor thing, poor man. He knows some people still support him. He knows he still gets a place in the media. That's why he keeps annoying everyone.

Pity him, pity him. I hope he wakes up from his nightmare and sees with his blind eyes what he has done to our country.

Anonymous 770241447347646: Whether you are a serial killer or not, it is open to speculation. The reason being, the three cases - Altantuya Shaariibuu, Kevin Morais and Hussain Najadi - raised more questions than answers.

The question of motive and who is the alleged mastermind remains unresolved.

You cannot blame the people for forming their own conclusion, as in all the three cases, there is something or someone connected to you.

Meerkat: Najib, I don't think that making light of the murders will absolve you from suspicion. Only your gullible Umno and PAS supporters will gobble it up.

Besides, it is very tasteless to be so glib over the deaths. For that alone, you have confirmed that you are heartless.

It is not too far-fetched to believe that you will carry that heartlessness one step further. Thus, "their" assertions are plausible.

Bruclax: We will save the serial killer for later. For the moment, we stick to serial plunderer of the national coffers.

Anonymous_2679c6e5: First of all, Harapan didn't bring out the murder allegations in their campaign against you. This is an outright lie. It was your 1MDB and your fingerprints on all the money trail that led to the downfall of BN.

Secondly, it is the public opinion that you are also a serial liar.

Speaking Sense: It is time this man answers the real questions instead of inventing duplicitous ones.

This is someone who has decided the only way to stay relevant is to live in la-la land and to lie often enough to make some think it is true.

Kahlil Gibran: The English language is a marvellous language and it usually has the apt word for everything - pathological liar.

But all politicians are pathological liars. I am still waiting for Harapan to honour its manifesto.

Anonymous_1548906909710.86131548905936360: "(PAS president Abdul) Hadi (Awang) said the Chinese community was part of Malaysia's multi-ethnic landscape and a civilised society should take advantage of a country's diversity to unite for a good cause and protect against elements that would bring harm."

What takes you so long to realise this? Your words must reflect your action. Otherwise, it's just empty words.

Anonymous_1537050742: With scores of corruption charges, surely you cannot deny that you are a serial/habitual robber.

Oscar Kilo: Yes, regardless, you are a serial thief. Kleptocrat. Kleptomaniac.

yoursay
najibabdulrazak
1mdb
Related Reports
I must be a serial killer, jests Najib
5 Feb 2019
Najib put through court 'revolving door'; Marzuki flayed over fake degree
7 Feb 2019
Source: Najib to be slapped with three charges again tomorrow
7 Feb 2019
Najib on his own, but welcome to contribute to BN - Mat Hasan
7 Feb 2019