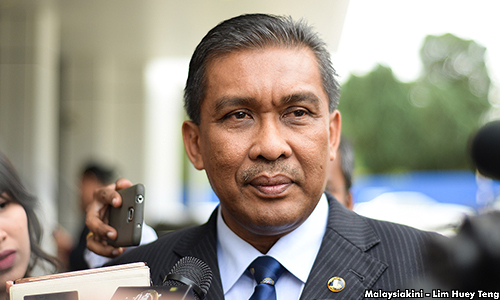 PAS president Abdul Hadi Awang's withdrawal of his defamation suit against Sarawak Report is not tantamount to an admission of guilt, according to party secretary-general Takiyuddin Hassan.

Responding to critics, Takiyuddin said Hadi took into consideration the overall interest of PAS and its members before deciding to settle the case with Sarawak Report editor Clare Rewcastle-Brown out of court.

"PAS believes the out-of-court settlement to discontinue the case is in no way tantamount to an admission of the issues raised, or to other related accusations made from time to time.

"Therefore, PAS urges all members to remain committed by giving the utmost and undivided loyalty to the leadership, and to always be cautious in our actions, so as not to fall into our enemies' trap," said the Kota Bharu MP.

Among others, Amanah leaders had called for a thorough explanation on claims that PAS had received an RM90 million payoff to support BN and Umno prior to the 14th general election.

Amanah supreme council member Hanipa Maidin had argued this was necessary, as the case will no longer be heard in court, where all related evidence and witnesses would have been presented.

In a 2016 article, Rewcastle-Brown claimed that former premier Najib Abdul Razak was wooing PAS ahead of the election, and that RM90 million had flowed into the accounts of the party's top leaders.

Hadi proceeded to sue Rewcastle-Brown for libel in April the following year.

On Feb 1, it was reported that Hadi decided to settle the matter out of court.

In response, Rewcastle-Brown had declared that the settlement was vindication, given that she did not need to remove the said article from her portal.