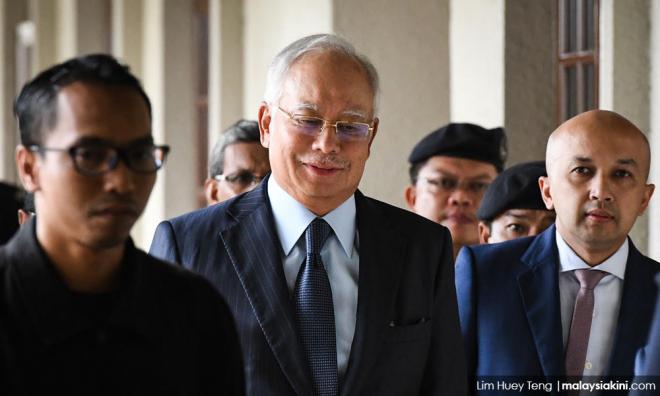 On Tuesday, the Kuala Lumpur High Court is scheduled to begin the hearing of cases involving former prime minister Najib Tun Razak, who has been slapped with dozens of charges relating to money laundering, criminal breach of trust and corruption.

Najib is the first former prime minister to find himself in the dock of a court.

The court charges against the 66-year-old have drawn worldwide attention as his case has been described as “the worst kleptocracy scandal ever” and are mostly related to scandal-plagued 1MDB.

As of Feb 8, Najib has been charged in court six times on 42 counts of criminal charges. The former BN chairperson and Umno president has pleaded not guilty to all charges.

The Pekan MP was first brought to the Sessions Court on July 4, 2018 to face three counts of CBT and one count of abuse of power in connection with SRC International Sdn Bhd funds, totalling RM42 million.

On Aug 8, he was charged again in the Sessions Court on three counts of money laundering involving the same amount of the same funds.

Despite attempts by Najib’s defence team, led by lawyer Muhammad Shafee Abdullah (photo) to have the trial adjourned pending an appeal on the withdrawal of the certificate of transfer (to the High Court), attorney-general Tommy Thomas informed the judge that the prosecution was ready to commence the prosecution’s case on Feb 12.

“Witness statements have been served on the defence and subpoenas have also been served to witnesses,” he said, adding that as a matter of fact, the prosecution had complied with the regulations under Section 51A of the Criminal Procedure Code pertaining to delivery of documents.

Sources told Bernama that the prosecution is ready with nine witnesses, among them government officers, to testify on the first day of the trial.

“We have on standby nine witnesses, but it depends on how the trial goes on the day. We have also prepared witness statements and after the witnesses read out their statements, the defence will cross-examine them,” the sources said when asked on the proceedings during the trial.

The sources also said that whether the trial will proceed or not on Tuesday, would depend on Najib’s appeal to stay the trial, which is scheduled to be heard on Monday afternoon at the Court of Appeal.

Najib sought to stay the trial relating to his seven charges pending the outcome of the appellate court's decision on his appeal pertaining to the withdrawal of the certificate of transfer by the public prosecutor.

Nazlan had on Feb 7, allowed an application by Thomas to withdraw the certificate to transfer the seven charges against Najib from the Sessions Court to the High Court.

Thomas informed the court that the prosecution made the move due to the Federal Court’s decisions in the Semenyih Jaya (2017) and M Indira Gandhi (2018) cases, which raised a doubt in respect of the exercise of the powers by the Public Prosecutor to transfer a case from the Sessions Court to the High Court.

“I will now withdraw the certificate I issued to avoid any possible argument that the transfer is a nullity,” Thomas said.

Najib subsequently filed an appeal to the Court of Appeal on Feb 7 in a bid to set aside the High Court ruling granting the public prosecutor’s request to withdraw the certificate of transfer.

Sources also informed that on Monday (Feb 11), the prosecution would apply to transfer the three additional charges of money laundering faced by Najib on Feb 8, 2019, from the Sessions Court to the High Court.

“We also will ask for the three additional charges to be jointly tried with the other three counts of money laundering which were brought earlier in court on Aug 8, as it involves the same funds (SRC International),” the sources said.

Read more: A guide to the criminal charges against Najib

On Feb 8, Najib had pleaded not guilty to three counts of money laundering involving RM27 million of SRC International’s funds.

The prosecution brought the additional charges against Najib in the High Court under Section 91 of Anti-Money Laundering, Anti-Terrorism Financing and Proceeds of Unlawful Activities Act (AMLATFPUAA) 2001. The section among others means that an additional charge against an accused can be brought at any court (either High Court or Sessions Court).

The prosecution withdrew the three additional charges and re-charged Najib in the Sessions Court based on procedural grounds.

The prosecution has submitted over 3,000 pages of documents including minutes of meetings of SRC International, witness documents and other related documents to the defence team in the course of the proceedings.

The prosecution will also call 50 witnesses to testify during the trial. As the case originated from the Sessions Court, the prosecution had applied to transfer the case to a higher court as the High Court has wider jurisdiction and if the case begins at the High Court, the appeals could be heard until the Federal Court, (and) if there are any complex legal issues, it will be resolved at the Federal Court.

Senior lawyer Sulaiman Abdullah was appointed as senior deputy public prosecutor by the Attorney-General’s Chambers to lead the prosecution team in Najib’s SRC International cases, and criminal lawyer V Sithambaram was appointed to assist the team.

Shafee, who was appointed as lead prosecutor in the appeal of Anwar Ibrahim’s sodomy II case in 2013, is leading the defence team and is being assisted by a team of lawyers, which includes among others Harvinderjit Singh and Muhammad Farhan Shafee.