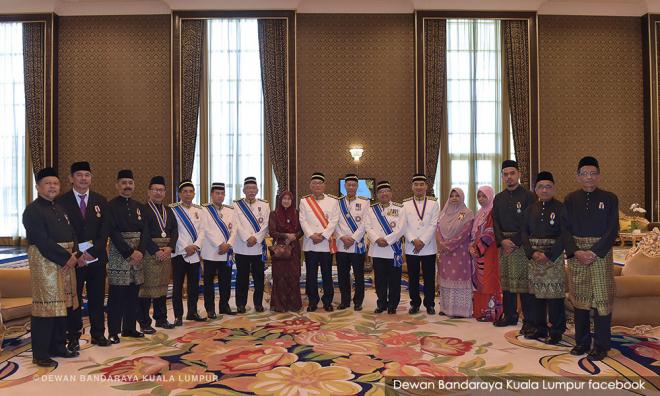 Editor's note: An earlier version of this article had stated that there were no politicians among award recipients. A reader has notified Malaysiakini that this was not accurate. This article has been corrected. We regret the error.

Interestingly, there was only one notable politician on the list - Hasanuddin Mohd Yunus, the Hulu Langat MP.

This year, a total of 200 awards were given out, down from 370 a year ago. It is understood that the list of recipients was vetted by the federal territories minister and the chief secretary to the government.

This investiture ceremony is relatively new, beginning in 2008.

Hasanuddin was among the 27 people who received the Panglima Mahkota Wilayah (PMW) award, which carries the title of "Datuk".

According to the official list of award recipients, Hasanuddin's award was related to his work with non-profit group Humanitarian Care Malaysia Bhd (MyCare).

Hasanuddin and Federal Territories Minister Khalid Abdul Samad are both from the same party - Amanah.

The Johan Mahkota Wilayah (JMW) award was presented to 36 people, among whom was Sharifah Hayaati Syed Ismail, a senior lecturer at the Academy of Islamic Studies, Universiti Malaya.

Three other national athletes were among the 68 who received the Pangkuan Mahkota Wilayah (PPW) medal. They are weightlifters Jabriella Teo Samuel and Muhammad Erry Hidayat Muhammad Hidayat, along with lawn bowler Nur Ain Nabilah Tarmizi.