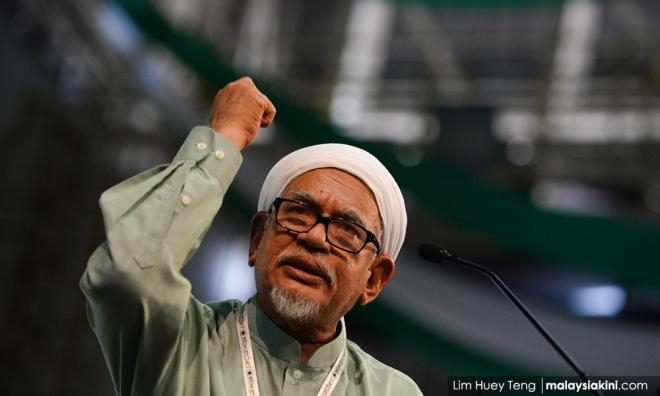 Hadi: PAS willing to forget past wrongs, unite for Islam

PAS president Abdul Hadi Awang said Muslims can become disunited in the pursuit of material things such as wealth and positions.

In a column in Harakah Online titled “Bersatu pertahankan kempimpinan Islam (United to defend the Islamic leadership)” today, he cited several historical examples of such divisions.

He also paraphrased the words of a Muslim caliph, Al-Mu'tamid ibn Abbad, who said: “It is better to herd camels for a Muslim who seized the throne than to herd pigs when non-Muslims are in power.”

Al-Mu'tamid was an 11th century caliph in a part of al-Andalus in southern Spain and Portugal.

He had uttered the remark when rebuffing his son's advice not to call for aid from the Berbers in North Africa to fight against the king of Castile.

Hadi said that despite Al-Mu'tamid uniting the Muslims, al-Andalus still fell after "hundreds of years" due to in-fighting among Muslim rulers.

Al-Mu'tamid and his kingdom was deposed and conquered by the Berbers, just four years after receiving their aid against Castile.

On the domestic front, Hadi said Malaysia witnessed an intense campaign for the prime minister's post without paying heed to Islamic hegemony and turning a deaf ear to those emboldened to threaten the position of Islam and its leaders.

Without mentioning names, he said the campaign also involved those in foreign countries.

The Marang MP said while PAS refused to compromise its principles for the sake of achieving power, it is willing to cooperate with others to defend Islam.

“PAS has been patient with regard to being in the opposition since its inception up to the present and is willing to be united (with others) in order to defend Islam and the nation's leadership despite different approaches.

“(PAS) is also willing to forget the wrongdoings towards the party, as well as to correct its mistakes because of this most basic interest (to defend Islam) while other issues can be postponed.

“PAS rejects the concept of the end justifies the means regardless of the sacrifices which have to be made and the distance which must be travelled, even becoming a candle which burns itself to illuminate others,” he added.

Following this, Takiyuddin said PAS has pledged to support Mahathir if there is an attempt within certain quarters in Pakatan Harapan to remove him as prime minister through a vote of no confidence.

PAS also implicated PKR president Anwar Ibrahim and DAP in this alleged plot against Mahathir. Both have denied this.