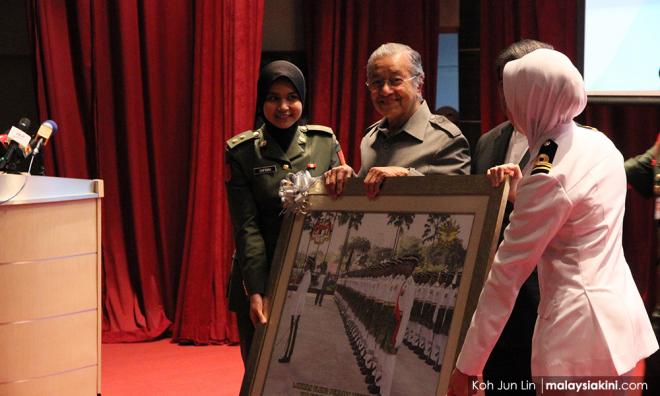 Mindef visit a trip down memory lane for Mahathir

Prime Minister Dr Mahathir Mohamad was delighted to visit the Defence Ministry in Jalan Padang Tembak, Kuala Lumpur, again and relive memories of his time as defence minister from 1981 to 1986.

He said the visit reminded him of the different challenges the ministry faced then, namely in tackling the guerilla warfare launched by the Communist Party of Malaya (CPM).

“I am happy because I got to visit the ministry again after such a long time, there are so many personal memories for me because I was the Defence Minister from 1981 to 1986.

“Maybe many who are here today were not born yet or were still in school at that time,” he said in his speech to about 600 Malaysian Armed Forces (MAF) personnel in conjunction with his first official visit to the ministry as the seventh Prime Minister today.

In conjunction with the official visit, the prime minister was also given the honour of taking the salute and inspecting the guard-of-honour formed by the First Battalion of the Royal Malay Regiment (RAMD), accompanied by its band, at Dataran Wisma Pertahanan.

Mahathir was briefed by Defence Minister Mohamad Sabu on the ministry’s main focus for this year, which included a White Paper on Defence, welfare of MAF personnel, readiness of the Armed Forces, as well as the veterans.