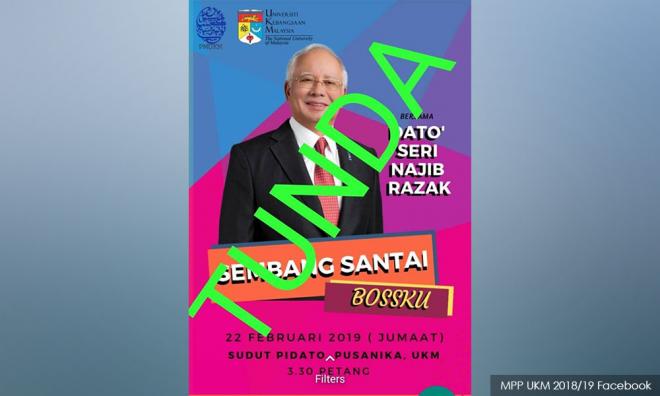 The UKM Student Council has moved its meet-and-greet event with former prime minister Najib Abdul Razak to out of the campus after university authorities postponed the original event.

Yesterday, UKM vice-chancellor Mohd Hamdi Abdul Shukor was quoted as saying that the “Sembang Santai Bossku” event, scheduled for 3.30pm today, would not be able to proceed as planned.

“I have been made aware by the Student Affairs Department (Hal Ehwal Pelajar) that the event has been postponed, but you will need to ask the department for more information.

“I think it has been postponed to a more comfortable date,” Mohd Hamdi said, as recorded in a Malaysia Gazette video.

He added that the decision had been made by the Student Affairs Department, and not by the management, as it was a student-run event.

“The vice-chancellor is not involved,” Mohd Hamdi stressed.

'The show will go on'

“The application for this programme was made according to procedure as determined by the university, which is by filling up the I-Star form and receiving an approval letter before we did things like booking the venue, which is the Pusanika,” he said on the council’s Facebook page.

Muhammad Izzat later announced on the page that Najib would be performing Friday prayers with UKM students before holding a meet-and-greet session at a venue outside campus - the Cartel Coffeeshop in Bandar Baru Bangi.

It has also been brought forward by an hour, to 2.30pm today.

BN will prioritise students' welfare if given chance to rule again, says Najib

UKM pulls plug on Najib event due to security, not politics