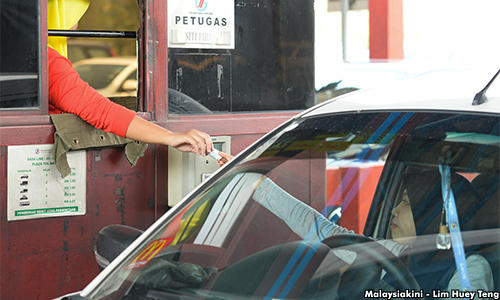 Putrajaya initiates talks to take over and 'abolish' tolls

In line with its promise to abolish toll collection in stages, the government today announced that it has entered into talks with Gamuda Bhd to negotiate acquisitions of four highway concessions which the company has a majority stake in.

The Prime Minister’s Office in a statement today said the move will eventually see the government doing away with the existing toll mechanism and replace it with a congestion charge.

"Upon successful takeover of the highways, the government intends to abolish the existing toll mechanism.

During the "off-peak period" between 11pm and 5am, the PMO said that commuters will travel on the highways for free.

"At other ‘normal’ travelling hours, commuters will enjoy discounted rates up to 30 percent compared to existing toll rates," it added.

The PMO further stated that revenue collected from the "congestion charge" will go towards operations and maintenance of the highways and repayment of loans.

"Any surplus collected will then be channelled into a public transportation fund to improve the quality of public transport in Malaysia," it said, adding that further details on the proposed exercise will be announced by the finance minister at a later date.