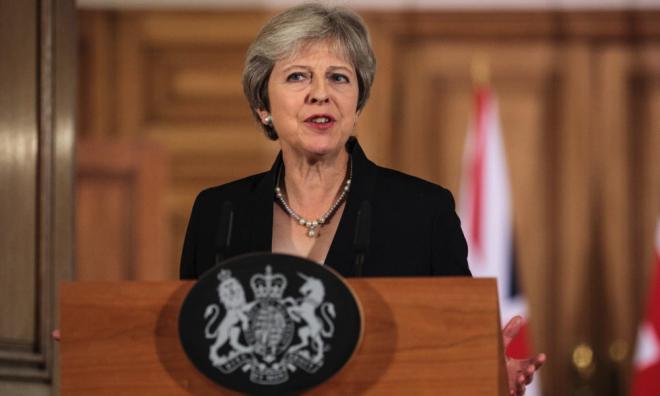 Prime Minister Theresa May said a timely exit for Britain from the European Union is “within our grasp” and insisted on Monday that delaying Brexit would be no way to solve the impasse in parliament over the departure.

Her comments came as the opposition Labour Party said it would support calls for a second referendum on Brexit, a potentially significant policy shift that could further damage May’s hopes of getting a divided parliament to approve her exit deal.

May said she wanted Brexit to happen as planned on March 29 and shrugged off expectations that she will be forced to delay to avoid leaving the EU in a disorderly way without an agreement.

With the crisis going down to the wire, May is struggling to get the kind of changes from the EU she says she needs to get her divorce deal through a divided parliament and smooth the country’s biggest policy shift in more than 40 years.

May, in the Egyptian resort of Sharm el-Sheikh for an EU/Arab League summit, met European leaders to push her efforts to make her deal more attractive to parliament, where frustrated lawmakers are gearing up to try to wrest control of Brexit from the government.

While she said EU leaders had given her a sense that a deal could be won, Dutch Prime Minister Mark Rutte said they risked “sleep-walking” into a no-deal Brexit and European Council President Donald Tusk described any delay as “a rational decision”.

For now though, May is sticking firmly to the script, saying extending the negotiating period with the EU, which was triggered by Article 50 and which ends on March 29, would not solve the Brexit problem.

“What it does is precisely what the word ‘delay’ says. It just delays the point at which you come to that decision,” she told reporters at the summit. “I think that any extension of Article 50, in that sense, isn’t addressing the issue. We have (a deal) within our grasp.”

May has promised to bring back a vote on her divorce settlement to parliament by March 12.

Her chances of winning any such vote were damaged later in the day when the main opposition Labour Party said it would support proposals for a second public vote to stop May’s Brexit deal if its own plan for Britain’s EU exit is rejected.

“We are committed to also putting forward or supporting an amendment in favour of a public vote to prevent a damaging Tory Brexit being forced on the country,” Labour party leader Jeremy Corbyn (photo) was due to tell his party on Monday, according to his office.

The move could attract lawmakers who would have backed May’s deal purely to avoid a no-deal exit, but who would prefer a second referendum.

It was not clear whether there is a majority in parliament supporting another public vote, which would require a Brexit delay to allow for time to organize it. Britons voted by 52-48 percent in favour of leaving the EU in a referendum in 2016.

Earlier, one UK official indicated delay could be an option if lawmakers refuse to pass May’s deal.

Tobias Ellwood, a defence minister, also told BBC radio: “If we cannot get this deal across the line, we are facing the prospect of having to extend.”

The EU has said it is willing to grant an extension if there is evidence parliament could pass the deal. Lawmakers overwhelmingly rejected May’s deal last month.

Tusk (photo) said it was clear there was no majority in the British parliament for a deal, telling a news conference:

“I believe that in the situation we are in, an extension would be a rational decision, but Prime Minister May still believes she will be able to avoid this scenario.”

The EU has said any agreement on a revised Brexit deal must be sealed by the bloc’s summit of national leaders on March 21-22 at the latest and May suggested that parliament could approve the deal before the bloc signed off on it.

A no-deal Brexit is seen as potentially hugely damaging to the Britain’s economy, the world’s fifth largest.

While sterling rallied on the suggestion of a delay, May has to tread carefully, with eurosceptics poised to leap on anything they see as an attempt to thwart Brexit.

“I think it would be disastrous if we had a delay,” said Bernard Jenkin, a Conservative pro-Brexit lawmaker. “I think that faith in our politics - what faith is left in it - would evaporate.”

May decided to push back a vote on her deal to give more time for talks aimed at securing changes to the Irish backstop, an insurance policy that would prevent the return of a hard border between the British province of Northern Ireland and EU-member Ireland.

Labour lawmaker Yvette Cooper has called on parliament to back her bid to seek to force the government to hand power to parliament if no deal has been approved by March 13 and to offer lawmakers the option of requesting an extension.

Two Conservatives have offered another plan that could be more attractive to the government. That would delay Brexit to May 23, the start of the European Parliament elections, if lawmakers have not approved a deal by March 12.

A government official said the proposal could be considered “helpful”.

brexit
theresamay
Related Reports
Seven lawmakers quit UK Labour Party citing Brexit 'betrayal'
a year ago
Germany warns it will stop extradition of its citizens to UK after Brexit
a year ago
May to hold Brexit talks with EU's Juncker, urges party unity
a year ago
Theresa May seeks more time to amend Brexit deal
a year ago