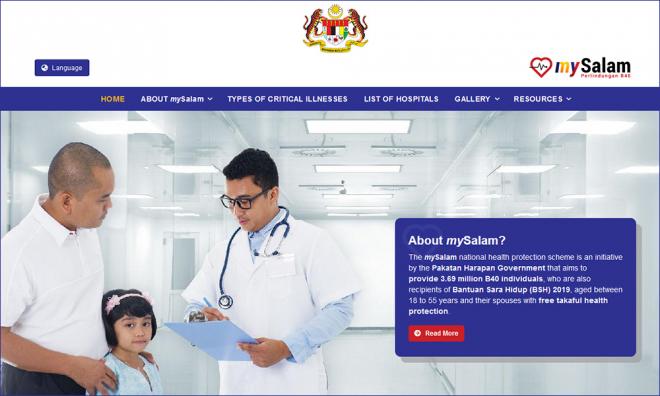 Following criticism over the lack of information in the run-up to the introduction of MySalam, an insurance scheme intended for the bottom 40 (B40) income earners, the Finance Ministry today unveiled an FAQ.

The lengthy Frequently Asked Questions (FAQ) section addressing criticisms was launched together with the MySalam portal.

Among the criticisms raised were concerns the scheme would benefit private hospitals at the expense of public ones, that the data of 3.7 million Malaysians who qualify for the scheme could be abused and that Great Eastern Holdings Ltd, which provided the RM2 billion seed funding for the scheme, was getting a better deal than the government.

In the FAQ, it said the MySalam scheme would not cover individuals who receive treatment at a private facility.

"At this point of time, this scheme does not cover patients who received/are receiving treatment at a private facility," it said.

To qualify, those covered must seek treatment at a public hospital. However, patients who are diagnosed at a private facility but have their treatment done at government hospitals do qualify.

Under MySalam, a patient who is diagnosed with any one of 36 critical illness will receive a one-off payment of RM8,000.

They will also receive RM50 daily as hospitalisation income replacement up to RM700 per annum when at any qualified hospital.

The FAQ also explained how the RM2 billion seed fund which the government requested from Great Eastern was arrived at. It said the payment was in exchange for exempting Great Eastern from requiring it to divest a 30 percent stake in its company to local entities.

"Instead of divesting 30 percent of their shareholdings to other parties, the government requested a cash contribution of approximately 10 to 12 times their estimated profit which Great Eastern would otherwise have forgone with the divestment.

"Based on Great Eastern Life Malaysia's net profit of RM792 million for the financial year ending December 2017, the 30 percent profit forgone by the existing shareholders would be approximately RM238 million.

"The discounted present value for the profit forgone for 10 years would amount to approximately RM2 billion.

"Hence, a negotiated sum of RM2 billion, with a built-in potential to increase further in the future, was arrived at with Great Eastern Holdings Limited," it said.

The FAQ also acknowledged there were pros and cons between having Great Eastern to pay RM2 billion or divest a 30 percent stake.

It said the government decided to go with the RM2 billion for the MySalam scheme as it would benefit nearly four million B40 income earners who are in need of healthcare protection.

Furthermore, it said the critical illness payouts would largely make their way back into the public healthcare system.

"A divestment to local investors and financial institutions will only concentrate the financial returns on the wealthier segments of the population.

"The 30 percent divestment would also mean a substantial cash payout directly to the insurers' foreign shareholders," it said.

On data protection, the FAQ said the 3.7 million people covered under the insurance will not automatically become Great Eastern clients because even though Great Eastern is supplying the insurance, MySalam remains a government-owned scheme.

"In addition, all data obtained is protected under the Personal Data Protection Act (PDPA)," it said.

The FAQ also explained that all participating insurers would be working with Bank Negara Malaysia and the Finance Ministry to introduce approved products to encourage higher insurance coverage for the under-covered B40 group.

"This will include the promotion of Tenang, a micro-insurance and takaful product designed by Bank Negara as announced by the finance minister in his 2019 Budget speech," it said.

The FAQ also addressed the sustainability of the MySalam scheme stating that the RM2 billion fund was expected to last for five years.

"The government expects to increase the size of the trust fund over time with additional contributions from Great Eastern Holdings Limited, other insurance companies as well as other sources to ensure the continued sustainability of the fund over the longer term," it said.

It added if insurance claims over the five-year period were less than the total premiums paid from the MySalam fund, the excess would be reimbursed back into the trust fund.

The FAQ said the MySalam scheme was not intended to be a comprehensive social coverage policy but an early step by the government to provide protection to those who are most in need.

"The MySalam scheme was designed based on findings by the Finance Ministry, Health Ministry and Bank Negara which indicate that many Malaysians from the lower income groups do not seek medical treatment because of the lack of emergency savings as well as the immediate loss of income due to hospitalisation," it said.