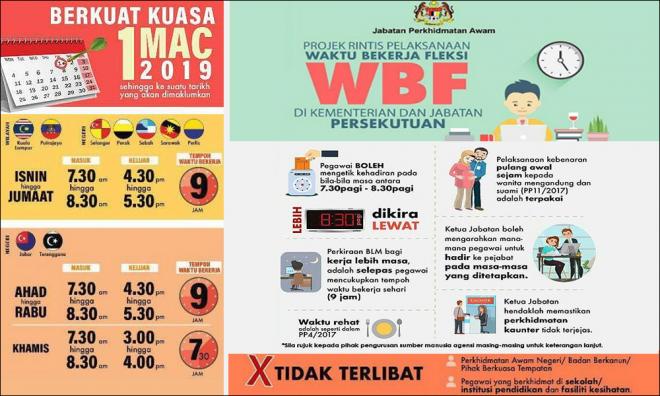 In a circular uploaded on its official Facebook page, PSD said that employees could start work between 7:30am and 8:30am, and clock out between 4:30pm and 5:30pm, as long as they worked nine hours in total.

This is applicable for those working in Putrajaya, Kuala Lumpur, Perlis, Perak, Selangor, Sabah and Sarawak.

Civil servants working in Johor and Terengganu – which have different working days – can choose to start work between 7:30am and 8:30am.

From Sundays to Wednesdays, they can leave work between 4:30pm and 5:30pm, and clock out between 3pm to 4pm on Thursdays, as long as they work a total of seven and a half hours.

As this was a “pilot programme,” PSD said, rollout will be limited to federal agencies in the aforementioned states.

The circular also stated that the end date of the programme will be announced later.

According to the PSD, department heads will be responsible for ensuring that employees participating in the flexible working hours initiative adhered to its requirements.

They will also be required to fill up forms indicating what time employees clock in based on gender and rank, as well as any challenges they faced in implementing the programme.

The five states not included in the exercise are Pahang, Kelantan, Penang, Malacca and Negeri Sembilan.