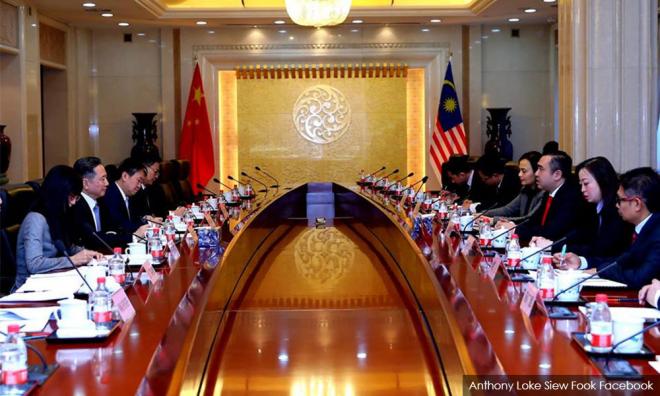 Why was Loke's wife in an official meeting in China, asks MCA

Transport Minister Anthony Loke has been accused of allowing his wife to attend an official meeting with his Chinese counterpart in Beijing last month.

In a statement today, MCA international communication and diplomacy bureau head Tee Ching Seng pointed out that Loke's wife was in a photograph of an official meeting with Li Xiaopeng.

The photograph was posted on Loke's Facebook page on Jan 26.

In October last year, the government had announced that ministers' spouses were no longer allowed to join them on official trips that are less than seven days.

Tee said that while Loke's wife's travel expenses might not have been borne by the government, it was puzzling that she had attended the official meeting.

"What official position does the minister's wife hold (which warranted her) attending the official meeting between governments?" Tee asked.

Malaysiakini has contacted one of Loke's officers who said that an official response would be issued soon.

During the meeting with Li, Loke said he had invited Chinese businesses to participate in Malaysia's port expansion projects, particularly in Port Klang.

He also invited Chinese rail industry manufacturers to use Malaysia as its Asean hub because the country had the requisite talent pool and supply chain.

On aviation, Loke said he encouraged airlines from both countries to increase flights and connect Malaysia to second and third tier Chinese cities.