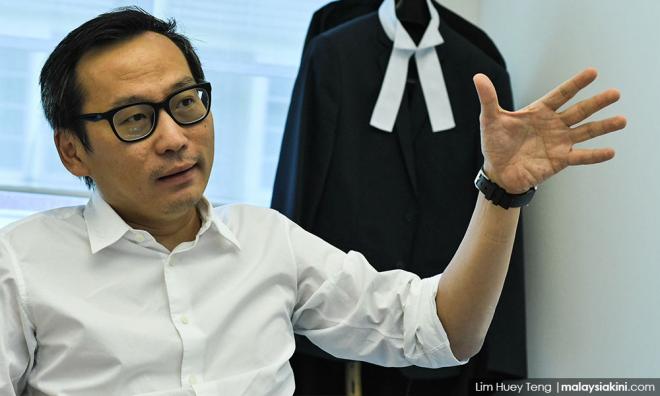 Attorney-general Tommy Thomas should reconsider his bid to cite a lawyer for contempt proceedings, according to Malaysia's representative to the Asean Intergovernmental Commission on Human Rights (AICHR) Eric Paulsen.

Taking to Twitter this evening, Paulsen warned that contempt proceedings in defence of the judiciary would only reflect negatively upon the bench.

“An independent judiciary is fundamental to democracy. In dispensing justice, the judiciary must not fear or resent public criticism, including unjustified, intemperate or even crude ones.

“As it is often said, justice is not a cloistered virtue. The judiciary cannot escape close scrutiny of its conduct and judgments as the public has high expectations of its role as the custodian of justice and the Federal Constitution.

“The judiciary can only command public confidence and respect through its conduct in and out of court, in judgments to give the appearance of impartiality and independence,” he said.

This is over statements Arun made online with regard to the court's decision to expunge a dissenting judgment by Court of Appeal judge Hamid Sultan Abu Backer in the case of Leap Modulation Sdn Bhd vs PCP Construction Sdn Bhd.

Senior federal counsel Amarjeet Singh said in his application that Arun's remarks had scandalised judges and the court.

On Feb 14, Hamid made a series of explosive allegations in an affidavit filed in support of lawyer Sangeet Kaur Deo's application to cite the chief justice for failing to defend the judiciary's integrity over two instances of purported interference.

Among the issues raised by Hamid as examples of judicial misconduct was the move to expunge his ruling.

He claimed the Asian International Arbitration Centre (AIAC), through “sympathetic persons,” started exerting pressure on him over the dissenting judgment.

He also claimed that certain top judges had given a lending hand to the AIAC.

The AIAC has denied his allegations.

The government has agreed to set up a royal commission of inquiry to investigate Hamid's claims.

Advertisement
01
YOURSAY | Onus on S’gor MB to win back Gombak, Ampang for PKR
4 Aug 2020
02
YOURSAY | Afif can try his luck, but voters may not forget the treachery
4 Aug 2020
03
MySejahtera app to become compulsory and 9 news you may have missed
3 Aug 2020
04
Rohingya refugees have 'no rights', but children can access education - minister
4 Aug 2020