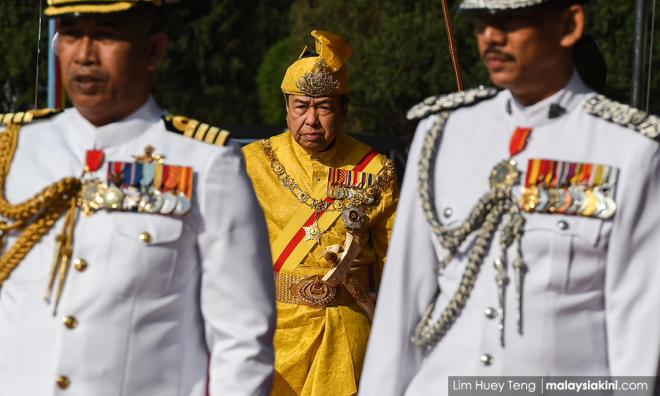 Selangor ruler Sultan Sharafuddin Idris Shah today expressed his concern over numerous threats which he said could defile the sanctity and nobility of Islam and weaken the faith of Muslims in the state and country.

Sultan Sharafuddin said he was informed that there were 45 deviant teachings decreed by the Selangor Mufti Department until December.

The ruler added that liberalism – which he said championed equality and brought with it LGBT culture – must be tackled quickly and effectively, so it does not become a trend that can destroy the Muslim community.

"The proliferation and spread of these teachings is no small matter and cannot be treated lightly. What is more worrying to me is that some of them take an extreme approach which can threaten national security.

"Such threats are unseen and are destroying Islam and its followers from within," he said when handing over letters of appointments to the nazir and imam of mosques in Selangor at Istana Alam Shah today.

In order to overcome such threats, Sultan Sharafuddin said the study of the faith based on Sunni teachings must be boosted at mosques, so that it will continue to be the basis of the faith of the Muslims in the country.

The ruler also reminded nazir, imam and mosque committees to only invite preachers for ceramah at mosques and surau who are accredited by the Selangor Islamic Religious Council (Mais).

"For foreign preachers, as I have said on Aug 21, 2015, they are only allowed to deliver their ceramah at the Sultan Salahuddin Abdul Aziz Shah Mosque, Tengku Ampuan Jemaah Mosque, Bukit Jelutong and Sultan Suleiman Mosque, and that too after special accreditation is obtained form Mais."

In the meantime, he also expressed his deep concern over the disunity that occurred among Muslims in Selangor because of political differences.

Sultan Sharafuddin pointed out that all politicians – especially elected representatives, whether state or Parliament, from government or opposition parties – are not allowed to hold ceramah and deliver speeches in mosques as well as surau.

This is because he wanted all mosques and surau to be free from any party political activities, in order to prevent it being changed from being a platform to unite Muslims to that for disunity because of different political ideologies.

"I also do not allow any form of defamation and dissemination of false news as it may disgrace certain individuals. The news or information received must be reviewed first to confirm its validity.

Sultan Sharafuddin also advised all parties to make the mosque the most respected place and the foundation to build social harmony, as well as reminding mosque administrators to work hard to mobilise the institution's function as a comfortable Muslim place of worship and a platform for the unity of Muslims.

The Selangor sultan was also very hopeful that the mosque could be administered and managed with professionalism and sincerity without mixing the agenda of self-interest.

Sultan Sharafuddin said the nazir, imam and members of the mosque committee should always comply with the Mosques and Surau Regulations (Selangor) 2017, as well as guidelines, circulars and directives issued by Mais and the Selangor Islamic Religious Department (Jais) from time to time.

"I stress that all mosques and surau conducting Friday prayers should read the sermon issued by Mais through the Selangor State Sermon Committee.

"I will not consent to any imam of a mosque or surau not reading or adding to the sermon text prepared by the committee," he said.

In this regard, the Selangor sultan advised all nazir, imam and members of the mosque committee to understand Mais' aspiration and inspiration in matters relating to the management of the institution.

He said it was to become the last bastion in dealing with the disunity crisis among Muslims, and that mosque administrators must be creative and dynamic in mobilising community-centred activities to build ties more effectively.

"The opportunity to serve in the mosque institution endowed by God to the nazir and the imam should be used as best as possible to help Mais and Jais guide the members of the community.

"The duties and responsibilities and the trust given by Mais and members of the community is the great trust from God," he said.

At the ceremony, Sultan Sharafuddin consented to the appointment of 827 nazir and imam from all mosques throughout Selangor. As many as 1,215 mosque nazir and imam are qualified to be commissioned for the 2019 to 2021 session.