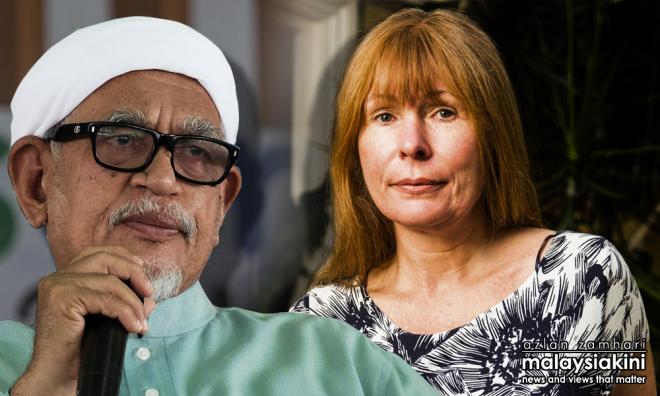 PAS president Abdul Hadi Awang has broken his silence over the allegation that RM1.4 million was paid to Sarawak Report editor Clare Rewcastle-Brown to settle his defamation suit against her.

The Marang MP denied that he or PAS paid the amount.

“I did not pay, PAS did not pay. This allegation is incorrect,” he told reporters in Kuala Terengganu this morning, according to Berita Harian.

Hadi claimed that the allegation was part of an agenda by certain quarters to tarnish PAS' reputation.

He said PAS did not possess the financial means to make the payment and that the party operated on funds contributed by the public.

The PAS president also commented on a photograph depicting him together with KTMB chairperson Rameli Musa, who is alleged to have made the payment to Rewcastle-Brown on Hadi's behalf.

He claimed the photograph (above) was taken in Thailand two years ago when he met former Thai foreign minister Surin Abdul Halim Ismail Pitsuwan to discuss the situation of Muslims in Myanmar.

“If I am not mistaken, the photograph was taken in Thailand... He (Surin) passed away two years ago. The issue of signing a cheque or whatnot did not arise (during the meeting),” he added.

Despite terming it as slander, Hadi said PAS is not interested in taking this matter to court to clear its name as it did not want to waste time or resources.

“We do not wish to spend too much time on suing (others). Too much money is spent. We will just complain to Allah.

“Tonight, we will hold special prayers nationwide. Those who do not believe we did those things... we leave it to Allah. Our action is to explain the truth to the people,” he added.

Hadi reiterated that the Sarawak Report article in 2016, which became the subject of the lawsuit, was a political agenda and that after PAS performed well in the last general election, there was no need to pursue the matter.

The PAS president had filed the defamation suit in London over the article which suggested that the Islamist party received RM90 million from Umno during the leadership of former premier Najib Abdul Razak.

It was claimed that the payment was in exchange for PAS' support in the last general election. Najib has denied this.

MACC is probing this allegation.

On Tuesday, Rewcastle-Brown's Malaysian lawyer Americk Sidhu claimed that Hadi's representatives offered to pay his client the sum in cash.

Americk said when he disagreed, this prompted the person who served as a mediator between Hadi and Rewcastle-Brown, to write a cheque for RM1.4 million instead.

On March 1, Rewcastle-Brown claimed that Hadi had paid her the RM1.4 million.

The London-based editor said that while she had agreed to Hadi’s condition that the payment is kept confidential by both parties, PAS secretary-general Takiyuddin Hassan’s insistence that no such payment has been made was a breach of the agreement.

PKR president Anwar Ibrahim had also raised the issue, claiming to possess credible information that the payment was made.