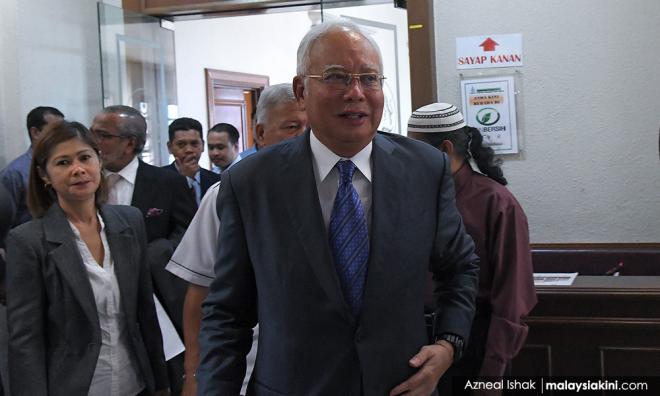 Former prime minister Najib Abdul Razak has appealed to the Court of Appeal against the High Court dismissal of his application to disqualify Gopal Sri Ram from leading the prosecution team in his 1MDB cases.

Najib is also appealing against the High Court’s refusal to grant him an order to stay the trial, which is scheduled for April 15 to May 3, pending the disposal of his appeal to disqualify Sri Ram, a prominent lawyer and a retired Federal Court judge.

The appeals were filed last Friday after the High Court delivered its decision on Najib's application.

DPP Ahmad Akram Gharib told reporters that another case management date was set because the grounds of judgment and the records of appeal were not ready.

On March 1, High Court judge Collin Lawrence Sequerah dismissed Najib's application after finding there was no evidence to show that Sri Ram would be acting in a biased manner as senior DPP in handling the case.

On the defence argument that Sri Ram must produce his Letter of Appointment (LOA) through fiat as a prosecutor, Sequerah said Najib had no right to demand the letter.

On Sept 20, 2018, Najib was charged with four counts under the MACC Act 2009 and 21 counts for money laundering involving 1MDB funds amounting to RM2.28 billion.

He was charged with committing the offences at AmIslamic Bank Bhd in Jalan Raja Chulan, Bukit Ceylon, between 2011 and 2014.