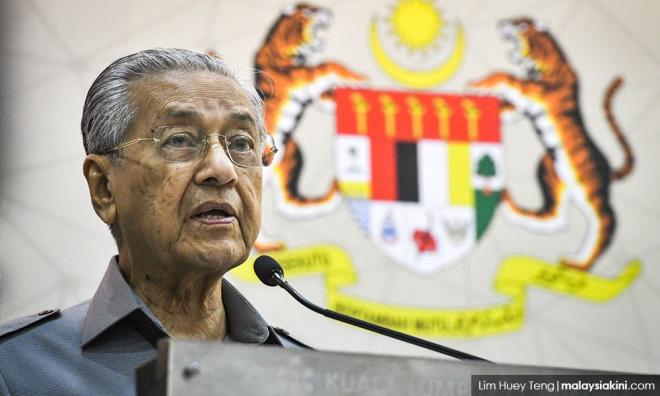 PM: M'sia will favour 'rich' China over 'unpredictable' US if it has to take sides

Malaysia will favour "rich" China over the "unpredictable" US, if forced to take sides in the geopolitical rivalry between the two superpowers, said Prime Minister Dr Mahathir Mohamad.

Speaking to South China Morning Post (SCMP) in an exclusive interview, Mahathir admitted that it was a "purely economic" consideration.

"Currently, the US is very unpredictable as to the things they do.

"(We have to) accept that China is close to us. And it is a huge market. We want to benefit from China's growing wealth.

"So at this moment, economically, we would prefer China. Politically, of course, we are not attracted towards a system of government that is very authoritarian," Mahathir was quoted as telling SCMP in Manila before talks with Philippine President Rodrigo Duterte.

According to the premier, Malaysia will not let Western "scaremongering" about China's telecom firm Huawei was involved in spying, to cloud Putrajaya's judgement on how to deal with Beijing.

Putrajaya will instead, make its own, independent decisions rather than take cues from abroad, he said.

“We always say, we have had China as a neighbour for 2,000 years, we were never conquered by them. But the Europeans came in 1509, and in two years, they conquered our country.”

On the Huawei issue, the premier said Putrajaya was "watching closely", the discussions on whether the firm's involvement in the high-speed 5G internet network in Malaysia would pose a threat to national security.

"At the moment, we have not found them a threat to our security. Not yet, maybe later.

"But we cannot just follow actions taken by other countries because Chinese technology seems to be ahead of Western technology," he said.

Several Western countries, such as the US and Australia, have restricted Huawei's involvement in developing such networks in their country, citing concerns that it could insert "back doors" in the technology that could be accessible to Beijing.

Huawei recently sued the US government, saying the ban on American government agencies, employees and contractors from using its products was unconstitutional.

Despite spreading its influence in Asean countries and worldwide through the One Belt One Road (OBOR) initiative, it does not seem like China "wants to build an empire," Mahathir said.

The nonagenarian also dubbed US President Donald Trump's trade war with Beijing as a strategy that "doesn't have any positive, good results".