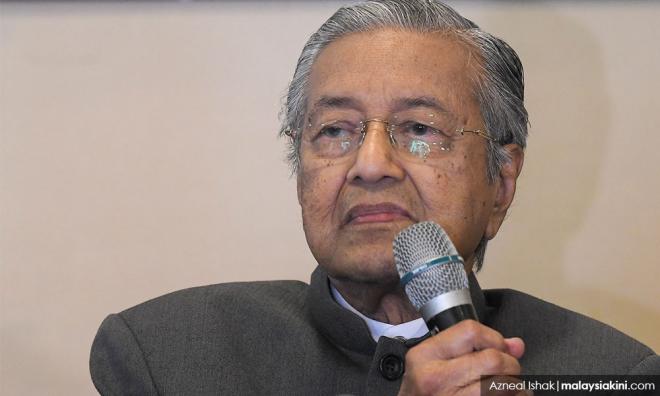 It is the sole prerogative of sovereign governments to decide on the amount of foreign loans they want to take on, after weighing their options and capabilities, said Prime Minister Dr Mahathir Mohamad.

He reportedly said this when asked about the allegation that China has been engaging in “debt-trap diplomacy” by offering cheap infrastructure loans to foreign countries through the One Belt One Road (Obor) initiative.

"You make that decision, you know capital flowing into the country exerts some influence over the country.

"So, it is up to the countries concerned to make sure that the money flowing into their country is not borrowed money, is money for infrastructure, but may be limited to money for investment in productive processes.

"The countries concerned must be able to distinguish what is allowable or needed by their country and what is not. If countries prefer to borrow huge sums of money, well, that is [their] decision,” the premier told South China Morning Post (SCMP) in an exclusive interview, published this morning.

China has been criticised for offering loans to foreign countries and then taking over its infrastructure when its government fails to service the loan.

Among the commonly cited examples by Beijing's critics is the Hambantota port in Sri Lanka, where the latter ceded to China on a 99-year-lease after falling behind on its debt obligations.

While acknowledging that maybe it is China's way of buying influence on "economy and maybe even politics", Mahathir said the Asian power, at least, has not moved to colonise other countries like the "Europeans of yesteryear" had done.

"It is all up to us," he was quoted as saying, further dubbing the Chinese as "very good business people, by nature".

On Thursday, Mahathir had cautioned the Philippines to avoid falling into a "debt trap" following the latter taking loan from China to bolster growth.

"If you borrow huge sums of money from China and then you cannot pay, when the person is a borrower, he is under the control of the lender. So, we have to be very careful about that," Mahathir told ABS-CBN News during his work trip to the Philippines as reported by the Straits Times, adding that countries like the Philippines should "regulate or limit influences from China".

Since coming to power in last year's general election, Mahathir's government has been reviewing several mega infrastructure projects that were signed up during the administration of his predecessor Najib Abdul Razak.

This includes the East Coast Rail Link (ECRL) project, which Mahathir said is still "under negotiation".

The matter will be on the agenda during his second trip to China next month, where he would attend the second Obor initiative summit to be hosted by Chinese President Xi Jinping.

“I am going there (Beijing) because I want to listen to what they are saying about the belt and road and at the same time given a chance, I would like to explain Malaysia’s attitude towards this policy of China.

"Whatever may be our attitude towards China, we have to admit that China is a big power. It is a regional power and we need to deal with them. We need to understand their policies and strategies and we have to make adjustments so that we can gain some benefit from China’s policies," the premier was quoted as saying in the 40-minute interview.

The RM81 billion ECRL project was first approved by the cabinet in October 2016. The construction was to be handled by China Communication Construction Company Ltd (CCCC), while the majority of the financing was to be provided by the Export-Import Bank of China (Exim).

On Sunday, Bernama reported Mahathir as saying that the government had paid RM200 million in six months as interest for the RM55 billion loan given by China for the project.

China overloading poor nations with debt, top US official says
16 Jul 2018
PM: M'sia will favour 'rich' China over 'unpredictable' US if it has to take sides
8 Mar 2019
PM to visit China in April
15 Feb 2019
Mahathir has right price in mind for ECRL to proceed
8 Mar 2019