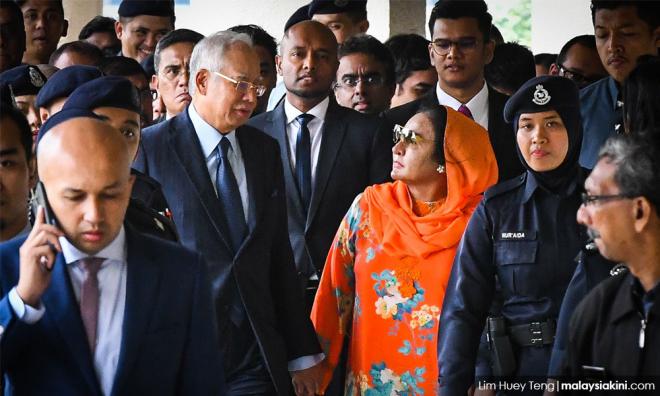 The Kuala Lumpur High Court was told today that the prosecution has filed a notice against Rosmah Mansor, wife of former prime minister Najib Abdul Razak, for her to declare her property acquisition in a money-laundering case.

Lawyer K Kumaraendran, representing Rosmah, 67, who is facing 12 counts of money laundering totalling RM7,097,750 and five charges of failing to declare her income to the Inland Revenue Board, said the defence has received the notice from the prosecution, which was served under Section 49 (1) of the Anti-Money Laundering and Terrorism Financing Act 2001.

“However, we need more time to look into the affidavit-in-reply filed by the prosecution to oppose our application to quash the notice,” he said during the case management before Judge Mohamed Zaini Mazlan.

The prosecution, represented by deputy public prosecutor Mohd Dusuki Mokhtar, did not object to the request by the defence.

The court then fixed April 25 to hear submissions from both parties on the matter.

Rosmah was accompanied by Najib and their son, Mohd Ashman, at today’s proceedings.

On Oct 4, 2018, Rosmah pleaded not guilty at the Kuala Lumpur Sessions Court to 12 counts of money laundering, involving RM7,097,750, and five counts for failing to declare her income to the Inland Revenue Board.

The charges on money laundering were framed under Section 4(1) (a) of the Anti-Money Laundering, Anti-Terrorism Financing and Proceeds of Unlawful Activities Act 2001 and punishable under Section 4(1) of the same law, which provides an imprisonment for up to 15 years and fine of not less than five times the sum or value of the proceeds of unlawful activity or RM5 million, whichever is higher, if found guilty.

Meanwhile, lawyer Geethan Ram Vincent, who is also representing Rosmah in the case, when met by reporters outside the court, said the defence received the notice (for Rosmah to declare her property acquisition) last November and had filed an application to strike out the notice.

He said Rosmah could not be asked to declare her acquisition of property and be charged over the same assets.

"Our client has the right to remain silent. With the serving of the notice (to declare her assets), it means she has been deprived of her right,” he added.