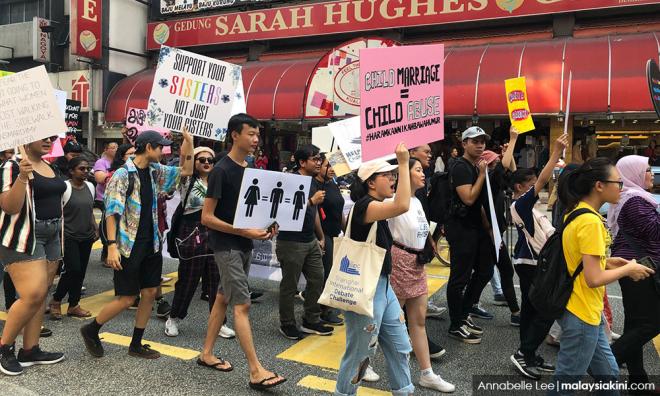 Defending LGBTs at Women's March an abuse of democracy - Mujahid

De facto Islamic affairs minister Mujahid Yusof Rawa says he is shocked that the Women's March in Kuala Lumpur today was used to defend LGBT rights, calling it an abuse of democracy.

"I was very shocked by the actions of some quarters today who abused democratic space to defend something that is wrong by Islam.

"As I have said before, the government is firm that LGBT practices will never be accepted in this country. It is impossible for us to acknowledge something illegal," Mujahid said in a Facebook post today.

More than 300 people had gathered in downtown Kuala Lumpur for the Women's March today, including members of the LGBT community and their supporters.

The rally had focused on five key demands, namely ending violence based on gender and sexual orientation; banning child marriages; ensuring women's rights over their own bodies and lives; ensuring a minimum wage of RM1,800; and destroying patriarchy in society.

While there were shouts of "jangan kacau LGBT" (don't disturb the LGBT) and "hidup LGBT" during the demonstration, the speeches had focused on the five key demands.

One speaker condemned recent acts of violence against transgenders, and denied that the LGBT community was seeking "special rights" other than to be treated as ordinary Malaysians.

Another speaker also denied that the community was demanding for rights to same-sex marriage.

Last August, Mujahid had called on the public to stop discriminating against transgender people.

“Transgender people are a reality we can’t avoid. Because we can’t avoid it, let us live with (them) in a context where they are given justice, that is all.

“Transgender people have never asked for same-sex marriage, they just want to live in peace. I have been very consistent in saying you can’t hurt fellow Malaysians without reason just because they are different from you,” he had said.

However, he has maintained that the government doesn't accept LGBTs.

Meanwhile, on police saying that the rally organisers did not have a permit, Mujahid said he would leave this matter to the Home Ministry to take action.

Wanita Umno chief Noraini Ahmad also condemned the presence of the LGBT community at the Women's March, saying that it could lead to "great destruction to social institutions".

She said the Pakatan Harapan government must not accede to the demands of the LGBTs.

"LGBTs have the same rights as other Malaysians, but it is the Harapan government's right to stop them from doing immoral activities," she said in a statement.

mujahidyusofrawa
womensmarch
lgbt
Related Reports
Impassioned plea for better protection of disabled women
a year ago
Mujahid: Not all 310,000 gay people are involved in immoral activities
2 years ago
Mujahid: Stop distorting gov’t statements on LGBT
2 years ago
‘Return my gender to me’: Trans people’s struggle to change their IC status
2 years ago