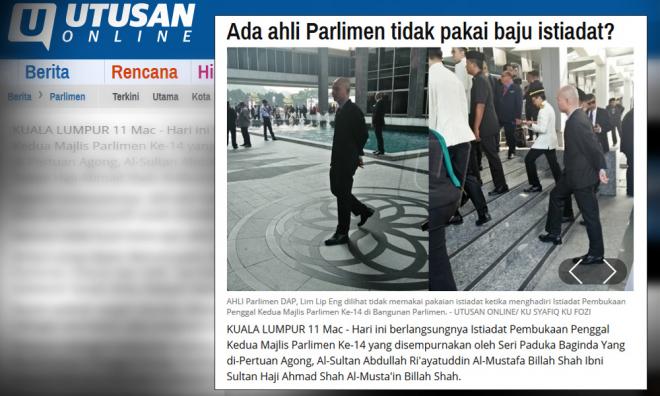 Kepong MP Lim Lip Eng is up in arms after he was outed by Utusan Malaysia for not wearing the ceremonial outfit for the opening of the new Parliament session today.

Utusan's report contained two photographs of Lim in a black suit while in the company of MPs in their ceremonial outfits. Also named in the report for not adhering to the dress code were Cheras MP Tan Kok Wai and Keningau MP Jeffrey Kitingan.

"Luckily, they could be recognised and were not mistaken as a reporter or ministerial officer. This is not new. It happened during the third session of the 13th Parliament as well.

"It is better for all MPs to wear the ceremonial outfit as a sign of respect for the Yang di-Pertuan Agong," read the highly editorialised piece.

The report added that Utusan Malaysia “will” make an attempt to contact the MPs.

In response to this, Lim wrote on his Facebook page that Utusan Malaysia listed himself and two others but not Marang MP Abdul Hadi Awang, Gua Musang MP Tengku Razaleigh Hamzah and Lenggong MP Shamsul Anuar Nasarah.

"There are many more (who did not wear the ceremonial outfit). What is Utusan's motive?" wrote Lim.

Malaysiakini verified that Hadi wore his trademark black robe for the occasion while several other MPs from GPS were also not in ceremonial garb.

Lim also posted a photo of himself wearing the ceremonial outfit for a previous parliamentary sitting.

When contacted for details, Lim said he could not wear the ceremonial outfit this time around because part of his collar was damaged and he could not get it repaired in time.

Asked why he was singled out by Utusan Malaysia, Lim replied: "Perhaps Utusan doesn't know how to cherish racial harmony in Malaysia Baru under the Pakatan Harapan administration".

Lim said he does not intend to take legal action against the Malay vernacular paper but hoped that they would not repeat the matter.