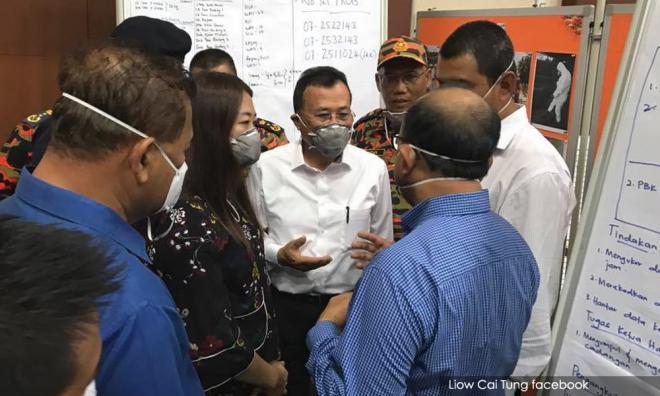 The Johor menteri besar's office has rubbished a viral social media post alleging that Osman Sapian said there is no need for residents in Pasir Gudang to be evacuated, as they "can close their doors".

Pasir Gudang is experiencing a pollution crisis following the discharge of chemicals into Sungai Kim Kim last week, with over 1,000 people being treated for exposure to toxic fumes.

In a statement today, the MB’s office said the allegation, which was circulating on social media as the headline of an article from a site called "MyInfoHarian.com", was false.

It added that the allegation did not reflect the full picture of the situation on the ground, which may or may not warrant an evacuation.

"An assessment by the state disaster management committee found that schools are categorised as high-risk areas as the building structures are open, while housing areas are situated in more confined areas, which are less vulnerable to contamination.

"The structure of public buildings, such as a school (tall and exposed), and the build of a private premise like home are important factors in determining how the pollution can be contained," the office said.

It was decided that no evacuation was necessary, based on scrutiny of the current situation and advice by agencies which have expertise in such matters, it added.

"Looking at the way the viral social media post was penned, it is clearly intended to spoil the reputation of the menteri besar, and paint the wrong picture of the situation."

Since the incident began on March 7, over 1,000 people have sought treatment for various respiratory ailments, with 397 people admitted to the ordinary wards and 13 to the intensive care unit.