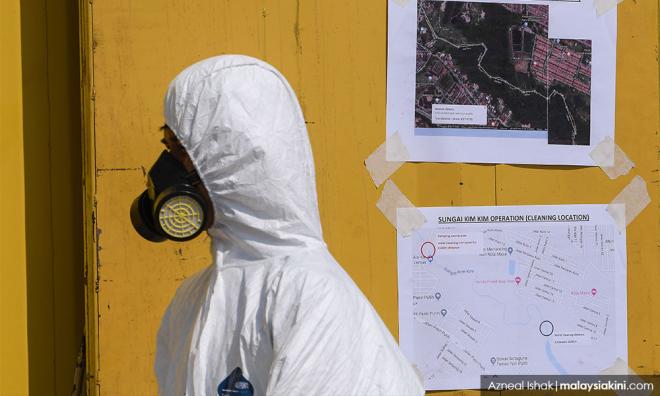 Niosh advises those at chemical pollution site to use protective gear

Those involved in cleaning up and handling chemical waste pollution at Sungai Kim Kim, Pasir Gudang, Johor, are advised to use appropriate personal protective equipment (PPE) to prevent themselves from being exposed to toxic substances.

He said they should also seek expert advice from the Fire and Rescue Department, Niosh and the Department of Occupational Safety and Health (Dosh) on other PPEs, including the type of clothing, helmets and even footwear they should put on in the high-risk areas.

The use of PPE in a right and correct manner can prevent injury and death, he said.

“It is very worrying that civil servants and those from the private sector and NGOs and even media personnel are only using masks or a nose cover. These will not filter poisonous particles and gases.

“Some of them were even clad in their normal clothes when going near the toxic waste disposal site at Sungai Kim Kim,” he said in a statement today.

The pollution from the chemical waste in Sungai Kim Kim since March 7 has caused more than 1,000 people to seek medical attention, while 111 schools in Pasir Gudang district, have been ordered to close indefinitely to prevent more students from being affected.

Lee said that following the incident, Niosh in collaboration with 3M Malaysia Sdn Bhd, a company that supplies PPE, had been collecting suitable respirators that could be sent to the affected area.

Lee added that Niosh had also sent its hygiene technical team to assist in the process of monitoring poisonous gases at the Taman Pasir Putih community hall, which had been ‘transformed’ into a makeshift hospital providing early treatment to those affected by the chemical pollution.

He added that under the Occupational Safety and Health Act 1994, it was the duty of an employer to provide PPE while the employee was obliged to use it.