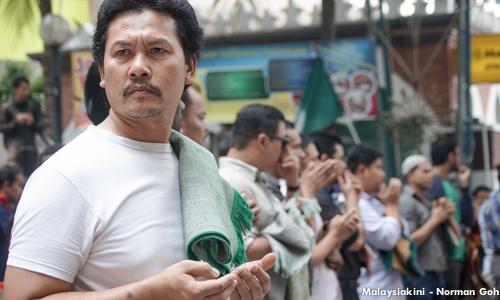 YOURSAY | ‘We are now on a slippery slope of religious and racial extremism.’

Kawak: There is nothing to be shocked about the unprecedented sentence (10-year jail for insulting Islam).

It is a matter of time when the Umno-PAS combo takes over the reins of the government, they will amend the law to put to death anyone committing blasphemy like in Pakistan.

Every day without fail, Umno-PAS politicians are turning everything under the sun into a religious or racial issue. All for the sake of gaining popularity and to demonstrate their new-found strength.

They are totally irresponsible by indulging in such politics which is detrimental to the nation's wellbeing.

The country is facing economic woes brought about by the previous Umno administration. There are lots of social ills that need the attention of Malaysians but Umno and PAS are blind to them.

What they want to see is getting more support from their racial and religious rhetoric.

TCM: While I agree we should not insult anyone’s religion or race, taking 10 years away from someone’s life for a lapse of judgement in posting comments on Facebook is too much.

It is a problem only if we allow it to be. If a public figure says it, the impact is higher and thus the sentence should be harsher. An unknown person saying such things is like a person mumbling to himself in the middle of a rainstorm.

Only those who wish to be offended would take offence and dig the matter up and propagating it further.

Indeed, 10 years is ridiculous. Fine the person and get him to do some community service but don’t throw him in prison for 10 years.

TehTarik: How come Muslim preacher Zakir Naik has not been charged for insulting Christians, Hindus and Buddhists?

He should be charged under Section 298A of the Penal Code for causing disharmony and hatred on religious grounds. Why the double standards?

We are now on a slippery slope of religious and racial extremism. We have probably reached the point of no return.

Never before has the nation been so polarised. It is probably time for those with means to consider emigration, especially the young generation.

Don't be mesmerised by the semblance of modernity like malls, restaurants and bars in the big cities. All this can disappear once an extremist Islamic government comes to power.

Jay: With court decisions like this, and with Malaysia continuing to harbour and refusing to extradite a wanted person being probed in India for terrorism and money-laundering charges (and who is also barred from Bangladesh), where are we headed?

Malaysian-United: If someone stated a documented fact about a religion, would that be considered insulting that religion? Can the AG (attorney-general) please define what amounts to an insult? And why is the sentence so exceedingly harsh?

Will someone who "insults" another religion (apart from Islam) be subjected to the same rules and punishment? Why is the government suddenly so zealous in defending Islam?

Is this what Economic Affairs Minister Azmin Ali means by not needing to be apologetic in defending bumiputera rights - that the government is at discretion to apply the maximum punishment against the non-Malays for anything deemed to be mocking the Malays?

Enough of your crap, Pakatan Harapan. If you are too cowardly to stand up to Malay extremism but instead take it out on the non-Malays to project yourself as the "protector" or "champion" of the Malays, then you can no longer claim to be the government for all Malaysians.

Roger 5021: Yes, can we have some clarity in what exactly constitutes "insulting Islam"? Does this include non-Muslims criticising Muslim leaders for stealing and lying?

Is insulting the sensitivities of one's belief extended to religions other than Islam?

Kangkung: In the past, there were also cases of Muslims desecrating a church and insulting other religions, but these people were never jailed. So again, are there two sets of rules here?

Is the government going to pledge that the same sentence will be meted out when a Muslim person were to insult other religions?

Cogito Ergo Sum: Any response from a non-Muslim on this matter will earn the wrath of even the most moderate.

But the problem is, if a Muslim leader from Harapan says anything critical of this sentence, he or she will be deemed an apostate and generally be condemned for not protecting Islam. Hence, a conundrum.

Mission Accomplished: Cogito Ergo Sum, so you are suggesting sensitive issues best not be debated but, swept under the carpet. Why not admit it was pure cowardice.

Oxymoronictendencies: I rarely agree with lawyer Latheefa Koya, but in this instance she is right.

Ten years is entirely disproportionate. Meanwhile, we witness the endless delaying tactics in regard to the prosecution of thieves and kleptocrats.

The judicial system is obviously desperately flawed and the sooner a proper RCI (royal commission of inquiry) into the entire system is undertaken and completed, the better.

Tomorrow would certainly not be too soon.

Gaji Buta: Minister in the Prime Minister's Department Mujahid Yusof Rawa, why are you only monitoring insults against Islam? What about other religions? Is your ministry only being paid by Muslim funds?

Palmyra: The accused can still appeal to a higher court as this is allowed in our legal system. I feel certain that the appellate court will revise the sentence, hopefully.

yoursay
islam
religion
Related Reports
Insults to religion: Time for Malaysia to grow up
a year ago
Include counselling in sentence for insulting religion, urges Abim
a year ago
A death blow to religious discussions
a year ago
Insulting Islam – heavy sentence for first timers excessive, says ex-mufti
a year ago