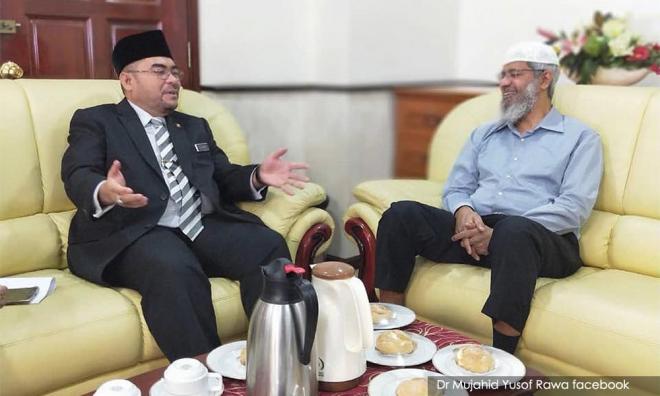 G25 – Don't meet with Zakir Naik, send him packing back to India

“For someone who is promoting moderate Islam, Mujahid should not have anything to do with extremist Muslims like Zakir,” said its spokesperson Noor Farida Ariffin.

“It was shocking to see Mujahid with Zakir. We should send him packing back to India,” she added.

India has requested the extradition of the preacher, whom it has accused of being involved in hate speech and money-laundering activities.

However, Prime Minister Dr Mahathir Mohamad said Putrajaya would not bow to pressure whereas Zakir, who is now a Malaysian permanent resident, claimed that his reputation has been maligned by religious fanatics in India.

According to FMT, Noor Farida said Zakir has been insulting other faiths and distorting Islam for his own purpose.

She was referring to his call on Muslims to vote for Muslim candidates during the last general election.

“Obviously, he thought, like everyone else, that the BN government would win the election and remain in power,” she added.

On Wednesday, Muhajid met with Zakir for more than an hour and later described his preaching efforts as a source for inspiration in a Facebook posting.