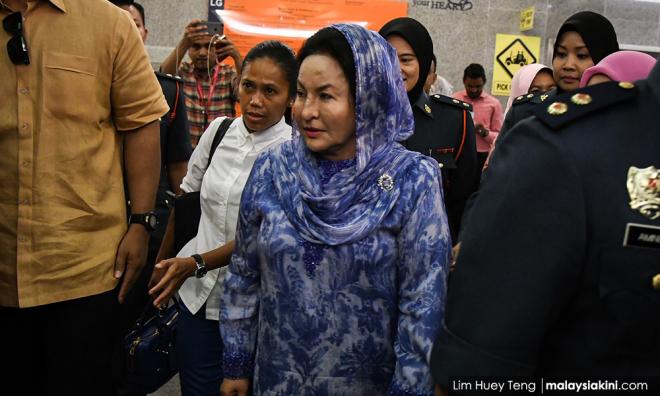 The High Court in Kuala Lumpur today allowed the prosecution's application to transfer from the Sessions Court to the High Court the case involving two graft charges filed against Rosmah Mansor, who is the wife of former prime minister Najib Abdul Razak.

Earlier, Sri Ram said the prosecution had sought to transfer Rosmah's case to the High Court as they wanted the case to be jointly tried with the case involving Rizal Mansor as the charges involved the same subject matter.

He said the High Court had wider jurisdiction than the Sessions Court to hear the case.

Jagjit objected to the prosecution’s application, saying that Rosmah's case should be heard in the Sessions Court as there were many courts in Kuala Lumpur that specialised in corruption cases.

"Here, in KL court, we have three corruption specialised courts with highly experienced judges. So, why must transfer the case to the High Court? Why do you want to conduct a joint trial, when they (Rosmah and Rizal) were charged separately at the Sessions Court?" he said.

On Nov 15 last year, Rosmah, 67, pleaded not guilty in the Sessions Court to two counts of soliciting RM187.5 million and receiving RM1.5 million for projects to provide solar energy to 369 rural schools in Sarawak.

On the same day, Rizal, 46, pleaded not guilty to four counts of soliciting and accepting bribes for himself and Rosmah, amounting to RM5.5 million, involving the supply of equipment and installation of the solar hybrid system for rural schools in Sarawak.

They were charged under Section 16(a) (A) of the Malaysian Anti-Corruption Commission Act (MACC), and faces imprisonment for up to 20 years and a fine of not less than five times the amount of the gratification of RM10,000, whichever is higher, upon conviction.