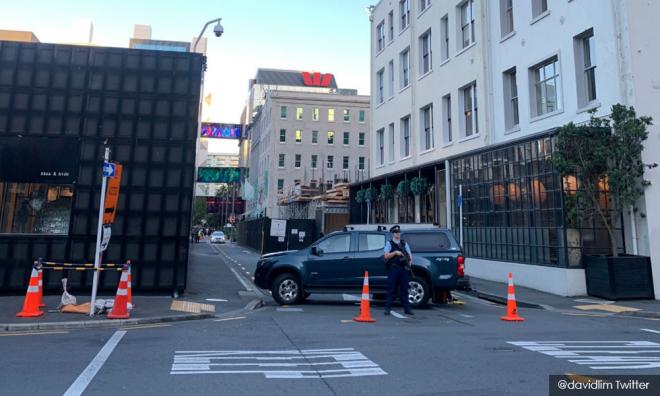 By 8.30pm people were being allowed in the station after being cordoned off, while trains and buses were halted.

Cordons were put initially put in place around the immediate area as a precaution and the Defence Force was notified.

Defence Force personnel carried out three controlled explosions of the bags around 7.40pm on Friday.

After the third explosion, the Defence Force's robot picked up the black backpack with orange stripes and a man in bomb-proof gear went through the bag's contents.

The Defence Force personnel first arrived at the scene at 7pm and the cordon was pushed back 100 metres while police moved people out of the area.

Inspector Ross Barnaby said the backpack was left outside a hotel.

"Police are being very cautious and have called in a specialist search group to investigate," Barnaby said.

Popular restaurant Cafe Hanoi and surrounding buildings are just metres away from the bag and had been evacuated.

The police are heavily armed after the tragic incidents in Christchurch.

Surrounding streets remain open and buses in the area are still running.

Trains were beginning to run again on Friday evening but commuters were asked to expect delays and cancellations.

Police were called later called to an unattended bag left at a bus stop on Victoria St in central Auckland.

A police spokesman said cordons had been put in place for a short time as a precautionary measure but the bag was not suspicious.

Two M'sians among those wounded in shootings at NZ mosques