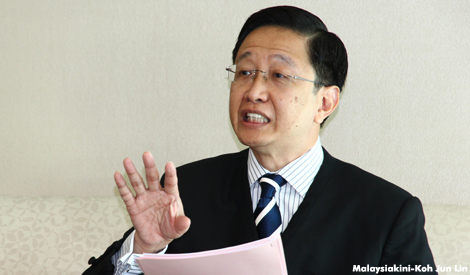 As many as 21 chemical substances were found in the flood retention pond in Taman Eng Ann in Klang based on the laboratory report on the water samples taken in the area.

Bandar Baharu Klang state assemblyperson Teng Chang Kim (photo, above) said he must wait for the full forensics report to identify the chemical substances which contaminated the pond.

“From the tests conducted in the laboratory, we detected 21 chemical substances in the sample that was taken from the flood retention pool,” he said in a press conference held after visiting the contaminated area in Jalan Kasawari 2, Taman Eng Ann today.

Teng, who is also Selangor exco member, said local authorities had taken mitigation measures including the 'oil boom' and 'oil pad' methods to absorb the chemical substance and stop it from spreading further.

He said the Selangor Water Management Authority (Luas) had turned off the Bukit Kuda sluice gate to stop the flow of water from the contaminated pond into Sungai Klang.

“The cleansing works have started and are expected to be completed in two days,” he said.

He added that early investigations found that the chemical waste was disposed of in two locations, namely the flood retention pool and several drains in the area which was part of the 1.5 km water network to Sungai Klang.

He said, for now, the waste in the pond was not flowing into the drains and will be drawn out before it is disposed of.

Meanwhile, in a statement issued today, Luas said the tanker suspected of dumping the waste has been found with the help of local residents, and efforts were being made to track down its owner.

The statement also said a police report was lodged on the matter at 8.30 am today.

“Luas has appointed a contractor for the cleansing works in the pond and drains, which began at 9am today,” it said.

It is understood that police have opened an investigation paper on this issue after receiving a police report made by Luas.