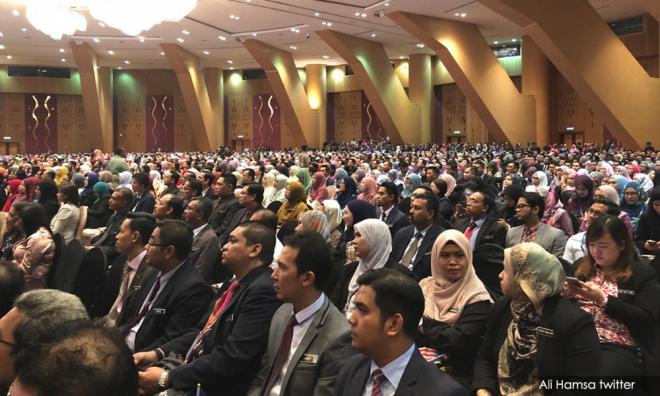 Yoursay: Najib has no credibility to talk about trimming civil service

YOURSAY | 'He never got it sorted when he was PM, so he thinks his solution now is the answer?'

Anonymous 770241447347646: The last person who should be giving any advice concerning Malaysia Airlines and the government service should be you, former prime minister Najib Abdul Razak.

This comes after you ran the Treasury to the ground, and left the new administration with a serious cash flow problem.

The new administration has to find ways to overcome this, knowing full well that these expenses cannot go on forever. In time, there will not be enough funds even to pay for those employed.

Najib, they have to be practical and not find solutions like yours, such as borrowing money from China and selling the nation to foreigners, to pay back debts.

We have in place a new administration that is serious in finding practical solutions.

The Way It Was: The civil service is bloated and redundant, and must be reduced as it takes up more than half of the national budget.

We have way too many civil servants doing next to nothing and if every department can cut 20 to 25 percent of its workforce, it would help. The redundant can get Voluntary Separation Schemes (VSS) and retrained to enter the private sector.

If we don't cut the civil service down to size, the national economy will suffer as there won't be enough funds for development.

It's a no-brainer, but does the government have the political will to do it? The prime minister says it must be done, and we are behind our prime minister.

Albert Ponniah: A child born with a silver spoon in his mouth will usually be in a difficult position to accept that the spoon won't be there always.

Thus, they would find it difficult to understand that there will be bad times and good; even if they are the cause of the bad times.

It is enough to know why such persons are not helpful in bad times.

Wira: Najib, it was Abdullah Ahmad Badawi and you who bloated the civil service to enlarge your vote bank.

Mahathir was instrumental in keeping the civil service in check through the privatisation of many government services during his previous prime ministership.

Wong Fei Hoong: Reduce the civil service not by privatisation, but by letting excess civil servants go or terminating lazy and inefficient bumps. Seriously look into human power needs in each department and cut away the excess.

Anonymous_1546136047: No turnaround plan will work as long as corruption exists in the Malaysia Airlines (MAS) management.

As a Malaysian, I want to support the national airline and I do, but it has really deteriorated in terms of food, the aircraft fittings which are just cheap and uncomfortable, and obviously, the limited routes.

Why was it one of the top airlines decades ago, and why can it not get back those glory days?

Najib never got it sorted during the time he was prime minister, so he thinks his solution now is the answer?

AnakJohor1920: Even as a responsible rakyat, I fully support the selling of MAS when we cannot turn around the airline anymore and it keeps bleeding money non-stop. Don't let MAS be a parasite forever.

National pride does not mean a thing to the rakyat anymore when our country's previous top politicians have no more shame in continuously running a loss-making airline every year. I don’t understand. What on earth is Najib crowing about?

Vote4changeJohor: There were several turnaround plans executed during the previous BN regime, including the turnaround plan in 2014-2015 where billions of ringgit were pumped into MAS when Najib was finance minister and MAS was headed by CEO Christopher Mueller.

The whole plan sunk and Mueller resigned 1.5 years later. Najib should be ashamed of his failure over the turnaround project for MAS, which also led to the loss of billions of ringgit then.

His plan failed to lead MAS back into the black again after three years, and we doubt Najib has any more viable plans or ideas to save MAS.

If there is no great, workable plan to offer for MAS, it is best for MAS to change hands. Why should anyone be proud of a big, white elephant which is a burden to keep?

Clever Voter: Najib is neither an entrepreneur nor a philanthropist. He is being charged with numerous cases of criminal breach of trust.

His reputation at home and abroad continues to attract all sorts of attention. But he still draws a crowd who are probably curious to hear what he has to say, or simply small fellows with peasant mentalities who would be happy with little crumbs.

Najib's view on MAS is pathetic. The airline has been mismanaged by all sorts of rent-seekers for years.

We are facing global trends of having rogue politicians worshipped as heroes. US President Donald Trump is one example. Najib is another. President Nicolas Maduro in Venezuela. There are plenty in the Middle East and Africa.

Even if Najib is grounded, there will be another of this type, irrational to a few but treated as a hero by many. That's the fear the future faces.

Anonymous 770241447347646: The question is, will the taxpayers support it? There is a limit to what the nation can pump into a loss-making enterprise.

The option would be to sell it to a private company while retaining the name. Let the new investors run it according to their own plan.

MAS is like a well with no end. How long do you think the taxpayers should pump in good, hard-earned money to save it? A sum of RM6 billion could easily build a dozen hospitals - which could end up saving thousands of lives.

Let the new administration find logical and practical ways to find the right solutions, unless you want to invest and use your own money to turn around this loss-making entity.