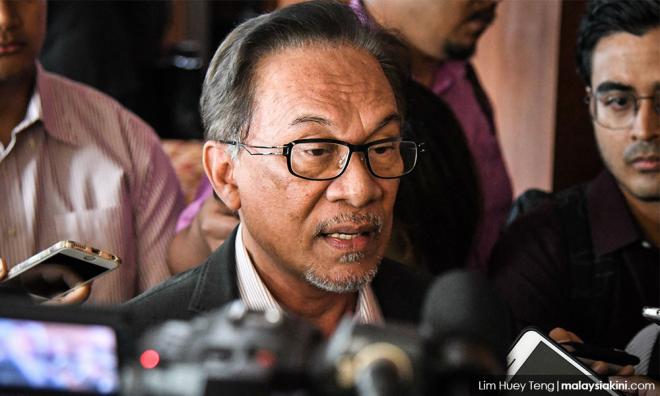 His call comes amid several government MPs still refusing to declare their assets despite this being the policy of the Pakatan Harapan administration.

"I would like to urge the government to introduce laws to make asset declaration compulsory for all MPs, ministers, senators, political appointees in ministries, GLCs and federal government agencies.

"The asset declaration information must be made public," Anwar, who is PKR president, said when debating the Yang di-Pertuan Agong's speech in the Dewan Rakyat today.

At present, all government MPs and members of the administration, including their political secretaries, have been directed to declare their salary and assets.

These declarations are listed on the MACC website. To date, six lawmakers have not declared their assets.

"It is hoped that this plan will free the country from corruption, which has for a long time shocked the nation, such as the endemic graft in government involving 1MDB, Tabung Haji, Felda and Mara."

Tough action should not only be directed against politicians, Anwar said, but also at civil servants involved in corruption.

He added that the MACC Act 2009 should be amended to address any weaknesses in investigating and prosecuting corruption cases.

On a separate issue, Anwar highlighted the need for an updated census to more accurately ascertain poverty levels in the country.

He noted that the reform and governance caucus he leads was briefed on poverty statistics by the Implementation Coordination Unit on March 5.

If this is true, Anwar told the Dewan, Putrajaya needs to re-strategise and focus more on urban poverty, while not neglecting those in rural areas.

However, he expressed reservation on the accuracy of the statistics and called for a more thorough collection of data.

"I propose that various agencies intensify their efforts to go down to the field and register the poor population in rural areas," Anwar said, adding that the onus should not be on the poor to spend what little they have to register themselves with the government.

anwaribrahim
assetdeclaration
Related Reports
New anti-graft measures will restore M'sia's integrity - PM
a year ago
All lawmakers, public officials should declare assets in full - TI-M
2 years ago
Waytha: I declared my cars, but MACC didn't consider them assets
2 years ago
Declare everything even if you have nothing, Muhyiddin says
2 years ago