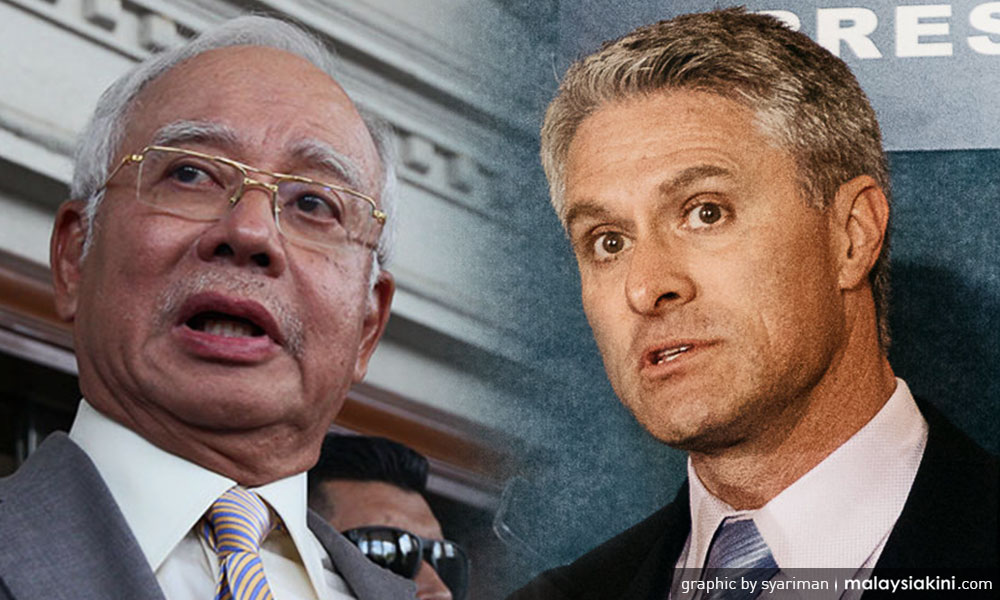 Former premier Najib Abdul Razak had purportedly engaged the services of a top Republican communications specialist last year, claimed a watchdog on the influence of money in US politics.

US law requires agents of foreign political actors to make periodic public disclosures. According to the Fara documents, Corallo had submitted the document on March 27 last year.

The document stated that "Mr Najib Razak" was Corallo's client, while the column for the type of services to be rendered to the client stated "not yet determined". Corallo also did not specify the salary he was to receive.

Corallo was best known as the spokesperson of US president Donald Trump's legal team during FBI investigations into links between the Trump 2016 election campaign and the Russian government.

Prior to that, Corallo was a public relations advisor for private army Blackwater Worldwide - which killed 17 Iraqi civilians in 2007 in what became known as the Nisour Square massacre in Iraq.

Corallo was also the spokesperson for John Ashcroft when the latter was US attorney-general between 2002 and 2005.

Corallo's own website took pride in the fact that he was called a "street-smart Republican spin-doctor" by prominent lobbyist group National Journal and a "master of disaster" by prominent political news organisation Politico over his crisis management skills.

The Wall Street Journal previously claimed that Najib had engaged Ashcroft's law firm since 2016 - when the US Department of Justice launched investigations into alleged laundering of 1MDB funds.

According to Ashcroft Law Firm LLC's Fara registration statement in 2018, the firm also provided Najib with "legal advice and counsel regarding improper actions by third parties to attempt to destabilise the government of Malaysia."

In a supplemental statement to the Fara unit on Dec 12 last year, Ashcroft Law Firm LLC said it did not receive any payment from Najib due to "interruption in work and any payment requirements."

But Jho Low is paying

Meanwhile, the Centre for Responsive Politics also reported that Fara documents had shown that fugitive businessperson Jho Low, who has been accused of masterminding the 1MDB scandal, had hired the services of law firms Kobre and Kim and Schillings International.

According to the Fara document's, part of Schillings International's job scope was to prepare or disseminate information on www.jho-low.com.

No budget was specified for the services rendered and Low - whose current whereabouts are unknown - was described as having an address in Tanjong Bungah, Penang.

The Centre for Responsive Politics reported that public documents showed that Low had paid about seven figures in fees for both law firms and that the figure was likely higher because some fees need not be reported to the Fara registry.

"Reevemark is set to receive US$175,000 for its work promoting Low from Feb 15 through the end of March followed by monthly payments of US$125,000, according to its initial contract.