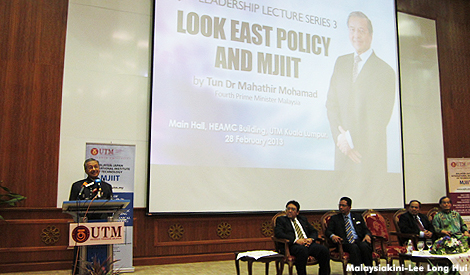 Malaysian graduates of Japanese universities under the country's Look East Policy, initiated by Prime Minister Dr Mahathir Mohamad in 1982, are fired up to move the country into the technology of the 21st Century, in line with Industry 4.0.

In conjunction with the 30th anniversary of the Alumni Look East Policy Society (ALEPS), they have published a book that showcases the success stories of 50 of these graduates.

Zulkifli Abdul Malek, who was the first ALEPS president from 1994 to 2002, said the 50 cited in the book, as well as other graduates, are now fully geared towards assisting the government in moving towards the second growth wave of the Look East Policy or LEP2.

"The expertise that we have is wide-ranging from technology to electronics, including mega-computers. We are here to give back to the nation and although we selected only 50 role models, there are many more who are ever ready to repay the good deeds of the government to us.

"On their behalf, I am most thankful to Tun Dr Mahathir for inspiring the Look East Policy, for without him we won't be here today," Zulkifli told Bernama.

Zulkifli said the policy was initially aimed at fulfilling the needs of industry then, in the sense that when investors from Japan, South Korea and Taiwan came to Malaysia, one of their key concerns was human resources.

This resulted in the pioneer batch of trainees being drawn mainly from among engineers to meet the requirements of Japanese industries.

"Now ALEPS functions not only as a platform to make available a trained workforce for industries, but we have spread our wings to areas like public administration, political and social development.

"Previously, all LEP graduates went back to the industry, but now they are more into the government sector and educational institutions," he added.

For his role in developing networks between ALEPS and Japan-related organisations and companies, Zulkifli, who was among the first batch of students sent to Japan, was a recent recipient of the Order of the Rising Sun, Gold Rays with Rossete award by the Japanese government.

He said his long association with Japanese institutions convinced him that Japan was committed to helping Malaysia meet the needs of its industries, especially in the field of learning, training and twinning, among others.

Another graduate, Mohd Yuzairin Md Yunus, said when he came back to Malaysia after graduation, he set up a company, Akar Indah Engineering Sdn Bhd, to train technical workers based on the Japanese work culture.

At the same time, they were encouraged to set up their own companies.

Mohd Yuzairin, who is CEO of Akar Indah, said the group now has six companies involved in high technology operations, including for Industry 4.0, such as autonomous robotics and system integration.

"Initially, we started in Malaysia, but since then we have expanded to Singapore and lately even to Sudan," he said.

Yuzairin said that because Malaysia began to industrialise in the 1980s, most of the machinery was now ageing, which also meant the country was still in the Industry 2.0 mould.

"To jump-start to the Industry 4.0 level, we need more young people who dare to enter the realm of the latest technology which can be sourced internally.

"It's not impossible for us to move into Industry 4.0 with the latest initiative being forging cooperation with the Malaysian Technology Development Corporation. We have established the Centre of Mind Pillar to train young people to venture into technological fields, and at the same time bring them into the industry itself," he said.

Yuzairin said the Look East programmes initiated by Mahathir were always relevant in the past, present and the future.

"The Look East Policy is vital because it manages to change the way Malaysians work, think and simultaneously create a far superior human capital for our nation," he said.

lookeastpolicygraduates
21stcenturytechnology
Related Reports
With Islam over-reliant on the West, it's time to look East
a year ago
M’sia can be a gateway to aerospace, aviation industry
a year ago
Times have changed, crimes getting more complex - IGP
a year ago
Study on use of plastic waste to pave roads under way
a year ago