Pahang MB not telling the truth about Cameron evictions - Ramasamy

"Is it true that farms located near this river are the major source of pollution? Is it true that Sungei Ichat supplies drinking water to residents of Cameron Highlands?" Ramasamy asked in a statement.

"Was water pollution detected recently or the action against farmers was something planned years ago?" he asked after visiting the area during the weekend.

Malaysiakini has contacted Wan Rosdy and is awaiting his response to Ramasamy's allegations.

Earlier, Wan Rosdy was adamant that his government has no option but to carry on with the enforcement actions against the farms located upstream along Sungai Ichat.

In the first enforcement, 11 farms belonging to local Chinese farmers were completely destroyed, without giving the farmers time to harvest their crops. 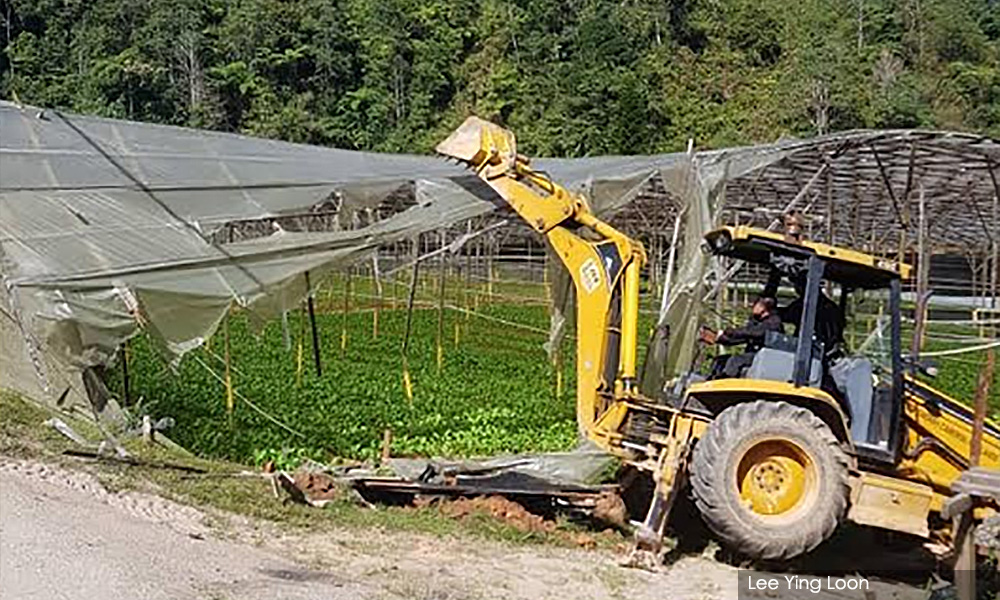 As a result, the farmers lost millions of ringgit worth of crops and the infrastructure put in for the farms.

The next phase of enforcement involving more than 50 farms operated by Indians will start at the beginning of April.

Sungei Ichat, which is near Sungei Terla, is not the river that supplies water to Cameron Highlands residents. It is Sungei Terla, Ramasamy said.

Water, Land and Natural Resources Minister Dr Xavier Jayakumar's call for Pahang to take action against water polluters was used as justification against the farmers, he said.

"The Agriculture Ministry, by remaining mum, has given credence to the action of the Pahang state," he added.

Ramasamy expressed uncertainty as to whether Wan Rosdy has been properly informed about numerous farmers drawing water from Sungei Terla, but nothing has been done about this to date.

He said almost all rivers in Cameron Highlands are polluted to a certain degree, but the least polluted rivers are Sungei Ichat and Sungei Terla.

"The two rivers merge at a certain point, certainly not at a point where they are separated and where water is drawn for drinking purpose from Sungei Terla through the function of a small dam.

"So the question of farmers polluting the main water source does not arise in the first place. The farmers have no connectivity to Sungei Terla," he added.

Ramasamy said a recent survey indicated that the water quality has not deteriorated, so the argument by Wan Rosdy (photo) that the farmers are contributing to pollution of the drinking water has no basis whatsoever.

He claimed there had been earlier attempts to move the farms away from the rivers, but nothing concrete was achieved.

"If the menteri besar had come out with a long-term solution to shift the farms away from sources of water supply, such a step would have been welcome.

"If alternative agricultural land had been offered, I am sure the farmers would have no difficulty in accepting this offer. But alas, the Pahang government miserably failed the farmers," Ramasamy said.

It is learnt that the farmers, who had worked the land for more than 60 years, had been given temporary occupation licences intermittently over the years, but the issuing of these licences was stopped recently, in 2017.

Farmers continue to stay there as, apart from the temporary licences, there are well-connected roads to the farms, enabling the marketing of their products.

Ramasamy noted that with contributions from the farmers, a power station was constructed some years ago, enabling the supply of electricity to the farms.

"The Pahang state government seems oblivious to the significance of the food industry in Cameron Highlands.

"It is poor taste on the state leaders to take such arbitrary actions against the farmers who have contributed so much for the state and country.

"The destruction of the farms will be a major catastrophe for the food industry in the country. It would ruin the employment prospects for many.

"If the farmers are not the source of water pollution, why would the Pahang state government move so mercilessly against these long-standing farmers?" Ramasamy asked.

He said the present "irrational action" against the farmers has to do with politics, as in the recent Cameron Highlands by-election, the vast majority of residents, who are mostly farmers in Kuala Terla, voted for the Pakatan Harapan candidate.

"This was a sore point for the BN government, which controls the state of Pahang.

"There is a commonly shared belief among the residents there that the state government might have the intention to bring in other settlers who would be sympathetic to the BN political coalition," he said.