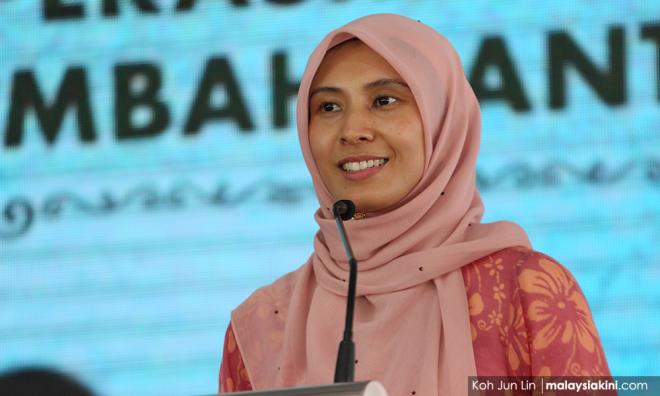 At that time it was a breath of fresh air to read Sangeet Karpal’s critical statement on Pakatan Harapan’s endorsement of BN 2.0 with Malaysia’s infamous autocrat as their “interim prime minister.

She also pointed out that the leaders in the opposition had remained silent in the face of Mahathir’s recent hollow “apology” over his use of the ISA during his first term as PM.

Then there was Anwar Ibrahim’s other daughter, Nurul Nuha who, on Sept 14, 2016, felt she had to uphold her family’s dignity by demanding that former PM, Mahathir apologise for the "trumped up" charges against her father.

The men currently critiquing Nurul so loudly doth protest too much.

Some of these male politicians have spouted the old feudal argument by saying that Nurul Izzah should show more courtesy toward the prime minister. Really? If Malaysians want to learn about the correct etiquette with regard to respecting prime ministers, they should learn from the recalcitrant Dr M himself! Didn’t he teach us the art of the surat layang when he wrote his piece against the Tunku during the May 13 crisis? It certainly was not sopan santun the way he slammed the Father of Independence on his way to political power.

If the office of prime minister has to be respected, why did Mahathir proceed to humiliate and denigrate prime minister Abdullah Ahmad Badawi after he had ascended to the post in 2003, and to do the same against prime minister Najib Abdul Razak after 2009? Wasn’t it the only way to get rid of the "Great Kleptocrat" as Dr. M has reminded us?

Let’s not forget that Mahathir does not respect prime ministers and presidents in other countries either, and that was why the former Australian PM Paul Keating bequeathed Dr M with the epithet “recalcitrant”.

Was Nurul Izzah wrong to refer to Dr M as a former dictator? Some young male politicians in Harapan may have been born after Dr M left office in 2003, but they only need to talk to their older colleagues like the former leader of the opposition and the PM-in-waiting himself to know that Dr M was called worse things after 1998. Nurul Izzah and her siblings know this only too well.

Or if these male politicians in Harapan are keen to learn, they can start reading all that was written about Dr M during his first term as prime minister by writers such as K Das, Barry Wain, myself and others.

Nurul Izzah has resigned from the PAC because Harapan’s promised reform of having an opposition MP chair the committee has been overruled by the PM. This is but the latest in a series of unilateral decisions by Dr M since he took office in May 2018, including the plans to privatise Khazanah and to start another national car.

The cabinet will have to bear collective responsibility for the consequences in the event of its failure. We are witnessing the same “silence of the lambs” culture for which the DAP used to criticise the BN leaders under Mahathir 1.0 with the new ministers saying “We’ll leave it to the prime minister” and “I’ll discuss this with the prime minister to let him decide”, ad nauseum.

The Harapan manifesto prohibits the PM from taking over the finance portfolio, but Mahathir has, in his first 100 days, taken the choicest companies, namely Khazanah, PNB and Petronas to be under the Prime Minister's Office. It is a return to the old Mahathirist autocracy.

The appointment of Prime Minister Dr Mahathir Mohamad and Economic Affairs Minister Azmin Ali to the board of Khazanah Nasional Berhad also goes against the Harapan manifesto promise of keeping politicians out of publicly-funded investments since it leads to poor accountability.

Only by insisting on boards being comprised of professionals and with rigorous parliamentary checks and balances for bodies such as Khazanah can we ensure a high level of transparency and accountability.

Mahathir’s response to this criticism was the old feudal justification: “I started Khazanah, so why can’t I be in it?” In other words, “Stuff your high ideals and democratic principles!”

Some of these male politicians have further claimed that Nurul Izzah should not have made her views known to a Singaporean newspaper because of our supposed “spat” with Singapore over the water agreement. Do we have “spats” with either Singapore or China, or are these issues just another diversion created by Dr M to cover up his unfulfilled reforms and failed economic policies?

Let us be clear. The 1962 water agreement between Singapore and Malaysia is sacrosanct, just like all the other international agreements made with China and other countries. Dr M himself should be held responsible for failing to amend the agreement when we had the right to do so in 1987.

In fact, this is another issue that he should apologise to Malaysians for. Malaysia’s current financial difficulties are strictly our own doing and we cannot rely on other countries for alternative sources of revenue growth.

Creating a “spat” over the water agreement is another vain attempt at creating a storm in a teacup out of a tired issue, when the new administration should be doing its best to nurture good bilateral relations with all our neighbours in the region.

Malaysians in the “new Malaysia” need to value and practice “speaking truth to power”. Instead of criticising Nurul Izzah based on feudal obeisance to authority, let her be an example, especially to the opportunistic men who have lost their principles and integrity. It means we have to take a stand if we truly want reformasi and to challenge injustice and authoritarianism.

All it takes is courage, courage to stand for one’s convictions and not the courage to throw conviction out the window for personal gain or political opportunism. “Speaking truth to power” means believing deeply in what you say - it may not be popular. It means taking a risk. It means standing for something without fearing condemnation.

After witnessing these interventions by Karpal Singh’s daughter, Sangeet Karpal and Anwar Ibrahim’s daughters, Nurul Nuha and now Nurul Izzah at the critical junctures, I say again: thank goodness for daughters. They have shown the male politicians they have the gall to speak truth to power.