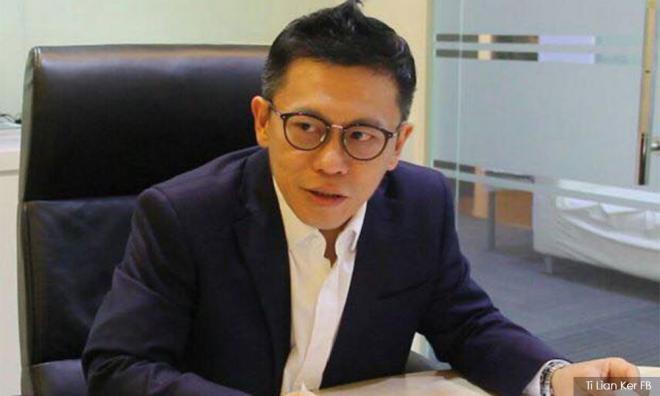 MCA backs Anwar on economic agenda, asks if DAP with him or Azmin

Although its BN coalition partner Umno has been leveraging on racial issues, MCA vice-president Ti Lian Ker said his party backs Anwar's stand for a needs-based instead of race-based agenda.

“All progressive Malaysians must be thankful that Anwar, the designated prime minister-in-waiting, has spoken out, to set it straight that our economic agenda must be based on needs. We in MCA support Anwar on this and hope there will not be another U-turn,” he added.

Ti also questioned DAP's silence on the matter and asked if this meant the party agreed with Azmin's statement that the Harapan administration fulfils its promises on the bumiputera agenda without fear.

According to the senator, the New Economic Policy (NEP) which was supposed to restructure society and eradicate poverty, has been a colossal failure due to its overemphasis and focus on race-based affirmative policies.

“These affirmative policies have been camouflaged, hijacked or diverted to enrich a few cronies instead of the broad poverty base that knows no racial barriers,” he added in a statement today.

Pointing to Azmin's remarks following Harapan's defeat in the recent Semenyih by-election, Ti expressed concern that the current administration might resort to a similar race-based agenda.

“Using Harapan's loss in the recent by-elections as an excuse to return to race-based economic policies is lame and unjustifiable.

“Voters voted against Harapan because of unfulfilled promises, non-deliveries and bad policies unrelated to race.

“Voters' disappointment should not be an opening for a narrative by Azmin, who is the economic affairs minister, to return to the path of abusing the NEP that does not benefit the nation but only enriches a selected few,” he added.

On that note, Ti claimed to be perplexed that DAP has ignored the possible return of racial policies and noted how the likes of Lim Kit Siang and his son Guan Eng, who is also finance minister, are silent.

“Our finance minister who proudly declared himself 'I am Malaysian, not Chinese' is silent on Azmin's proposition to the government. This is the time for him to speak out for the interest of all Malaysians.

“The most vociferous of all Kit Siang, who has been roaring like a tiger against race-based policies, has also fallen silent. Every DAP leader... has fallen silent.

“With their silence, are they agreeing with Azmin's proposition to return the government's economic agenda to race-based, instead of needs-based?” he added.

In a Twitter posting yesterday, Anwar declared that he would not compromise on the economic agenda and insisted that the policies be colour-blind.

Speaking to reporters today, the PKR president denied that his remarks were directed at Azmin.

tilianker
anwaribrahim
Related Reports
Needs-based economic agenda remark not aimed at Azmin, says Anwar
a year ago
Some want to protect ideals, some want to protect posts – Anwar on Azmin's tweet
a year ago
Responding to Nurul's remarks, youth minister spells out who Dr M is
a year ago
Lesson gleaned from Tories - Anwar warns infighting sounds death knell for parties
a year ago