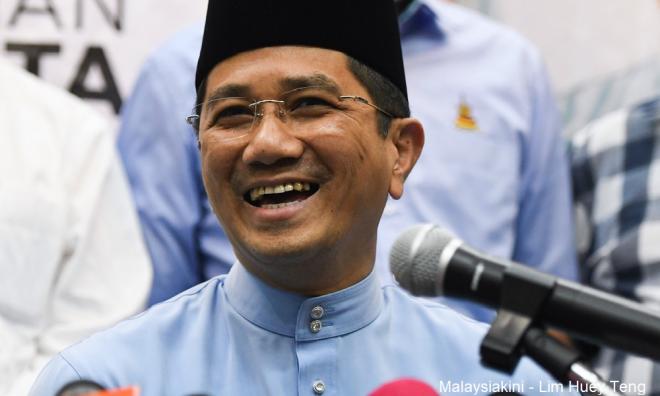 Economic Affairs Minister Azmin Ali is no stranger to cryptic social media postings when responding to controversial issues or taking veiled swipes at his rivals.

This evening, the PKR deputy president did the same in the wake of Anwar Ibrahim telling him to cool down.

Other Twitter users, who replied to the posting, speculated on the minister's response, with one posting a news article of Anwar reaffirming his and his family's support to Prime Minister Dr Mahathir Mohamad, and another on him telling Azmin not to get too excited over issues.

Apart from telling him to calm down, Anwar also noted that there are politicians who want to protect their principles and ideals, while there are those who seek to defend their positions at all costs.

He said this when commenting on Azmin's tweet over the weekend, which read: "This country needs doers who are prepared to tough it out all the way, not cry babies. Whatever it takes, we must make it work. If you can't take the heat, get out of the kitchen."

Although names were not mentioned, the tweet is believed to be aimed at Anwar's daughter and former PKR vice-president Nurul Izzah's interview with the Singapore Straits Times.

Nurul had expressed disappointment with the slow pace of reforms by the Pakatan Harapan government.

Commenting on how difficult it was to work with Mahathir, she had described him as a "former dictator who wreaked much damage on my family and the system."

Later that night, Azmin posted another cryptic tweet: "Please meet and talk over lunch not via tweet."

PKR member Latheefa Koya, who is known to be aligned to Azmin, also coughed up a cryptic tweet.

"In court, testimony of a close relative in your support carries no weight," she said with the hashtag #nepotismeatitsworst.

Harapan and my family back Dr M as PM: Anwar