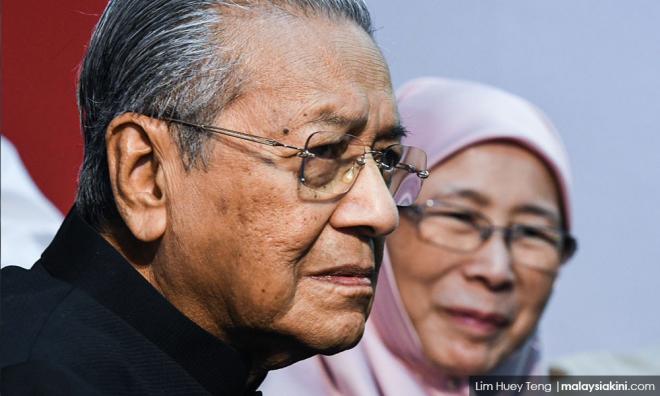 According to Wan Azizah, the Pakatan Harapan government should accept Nurul Izzah's criticism as constructive and work towards improving its performance.

"I have read it and the prime minister also agreed with Nurul Izzah's disappointment, so there is no issue (with her remarks).

"Is it wrong? She was not involved in misappropriation, the pilfering of national coffers or anything like that.

"We, as the government, should accept it as constructive criticism,” Wan Azizah was quoted as saying by Free Malaysia Today.

In an interview with Singapore's The Straits Times published on Sunday, Nurul Izzah described the difficulty and heartache of working with Mahathir following his return to power last year.

"I mean having to work with a former dictator who wreaked so much damage, not just on our lives, but the system," she had said. "It was not easy."

Nurul Izzah also expressed her disappointment in the slow pace of reforms since Harapan took over, and revealed that this would be her last term as a federal lawmaker.

The interview was greeted with mixed reactions, even among Harapan leaders, some of whom hailed her for standing up for her principles, while others criticised her for making purportedly negative remarks about Mahathir.

Perak Harapan chief Ahmad Faizal Azumu, for instance, was quoted by the New Straits Times yesterday as saying that a leader of Nurul Izzah's stature should take care to avoid making statements that could be detrimental to the country.

"In my opinion, whenever we give statements, especially if it is overseas, we need to be careful as we need to think of the reactions it will create.

"When she describes our current prime minister as a former dictator, then there will be other people who will mention leaders of other parties," Faizal (below) said.

"This will make things worse, and it will not bring any benefit to the country.

"Such a statement should not have come from a 'Puteri Reformasi', who has been working with me and other Harapan leaders to bring about reforms."

Nurul Izzah had defended her statements, stating that there is nothing new in her describing Mahathir as a "former dictator".

"There is nothing wrong with expressing your view as a Malaysian. Nurul Izzah is an MP and we should respect her view as someone who has earned the right to speak for the rakyat.

"Her tone was overplayed by the media, similar to Peja’s (Faizal) statement, which I am sure nothing was ever said to ask the Permatang Pauh MP to watch her mouth.

"As politicians, we should all be mindful of the choice of words, but the media should also be sensible in their reporting," Farhash said.