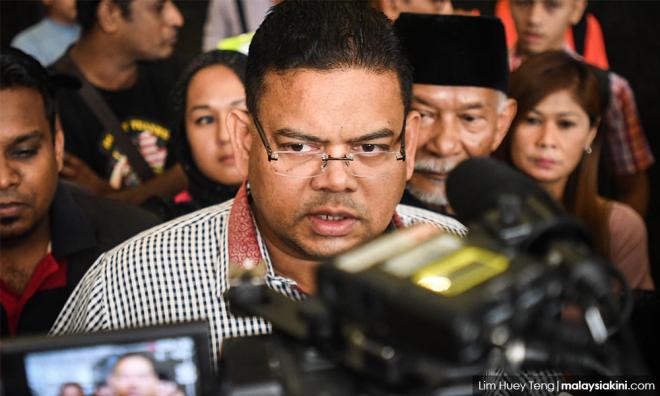 YOURSAY | 'How can they justify unprovoked violence as 'protecting' journalists and protesters?'

We were doing our job, not protesting – M'kini interns set record straight

Roger 5201: Umno is all about intimidation and hypocrisy - how in Allah's name can they justify unprovoked violence as "helping to protect" journalists and peaceful protesters?

It was so predictable - claiming to protect Bersatu Youth chief Syed Saddiq Syed Abdul Rahman, Papagomo (Wan Muhammad Azri Wan Deris) put the minister into a headlock, and again now when the video clearly showed the student being held in a chokehold by former PM Najib Abdul Razak's supporters.

What is puzzling is why the police have been hesitant to act and the university is not willing to call out former PM Najib Abdul Razak's provocateurs and gangsters.

Lone_star: It appears the thugs have perfected their harassment tactics. While a few are physically and verbally harassing their victims, others would pretend to "defend and help" their victims.

For crying out loud, just own up. Do not be cowards and attack young interns who were doing their job and earning an honest living.

Cogito Ergo Sum: This is totally despicable. The duty of journalists is to report the facts without fear, favour or intimidation. These Umno supporters think they can twist Malaysiakini like they do with the MSM (mainstream media).

Gone are those bad old days when editors and reporters had to write the ‘official’ version, rather than the truth.

The police, instead of being neutral and taking actions when a crime is being committed, kept their distance and actually harassed the victims instead of protecting them. This has gone on for too long a time.

The entire Pakatan Harapan machinery must be held responsible for this sham performance.

Siyoh: The police were already there, asking the journalists for their credentials, after which the journalists were still harassed by the hooligans in the presence of the police.

Indeed, the police can be deemed to be in cahoots with the hooligans.

VoteOfOne: Politicians of the great divide often are clueless about the role of journalism. Never mind about using journalists to amplify one's message, at times journalists do that too.

Press releases seemed unheard of by these politicians and they are so cheapskate even to pay for a proper copywriter. Moreover, they are unwilling to take the full blame of their foolishness, and would so easily claim being misquoted at best, or misunderstood at worst.

Aides to these politicians also have this whimsical protocol only known to them, that when they 'invite' reporters or journalists for an event during a certain period of time, that those hour(s) could only be used by the journalists to cover the politicians' agenda in positive view, and nothing else.

Sure, news sells when sensationalised. Journalists have a life and would fare better to spend more time with their families too than spending hours on ends to come up with creative sensationalisation of your news.

Most of the time, sensations are given on a platter by the politicians themselves.

TCM: By this report alone, I will renew my subscription. But jokes aside, what the both of you (Malaysiakini interns Ramieza Wahid and Mariam Nizar) did was brave.

You did your job well and despite the fear, stood up to the thugs. Keep up the good work.

I hope no reporter needs to go through unnecessary harassment like you did but you could stand tall that you kept your composure and professionalism throughout.

Bamboo: Umno has morphed from covertly hiring thugs to harass their political opponents previously. Now that they are out of power and no longer on the gravy train, they have to resort to doing the job themselves.

For once the academics have the sense to correctly point out that the protest was against the corrupt ex-PM, and not to insult Malays.

Quo Vadis: Are the days of harassing the victims instead of punishing the culprits not behind us?

The culprits go free, but those exercising their democratic rights are called up and questioned? Should not the thugs who manhandled the peacefully protesting students be punished instead?

Since when have supreme council members of Umno, the now discredited party, been allowed to determine what is only acceptable to them is indeed lawful, and take the law into their own hands?

Tidak Harapan: The police waiting for instructions? The thugs should have been arrested for assault and they should leave it to the attorney-general (AG) to prosecute.

You did nothing on such an obvious criminal act until a public outcry. IGP (inspector-general of police), are you really impartial or someone's lackey?

Vote4changejohor: There is no place for Umno in the Malaysian political scene if it continues to condone violence.

Earlier, it was the party’s Sungai Besar chief Jamal Mohd Yunos and his red-shirt gang. Now, it is its supreme council member Lokman Adam.

Shame on the whole Umno leadership. It is time the police and AGC (Attorney-General’s Chambers) to come forth and throw the book at these culprits.

Better Malaysia!: Can we expedite the retirement of IGP?